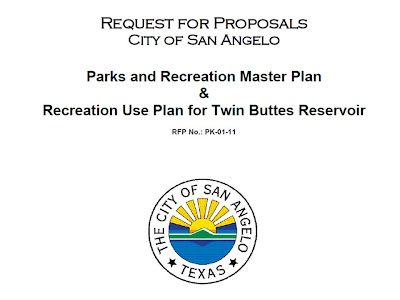 Windsurfer M informed me that access to the South Pool at Twin Buttes was restricted over July 4th weekend.  The City was trying to prevent Twin Buttes annual trashing and fireworks wars.

I e-mailed Carl White with a link to M's comment.  Carl got back with me quickly.  He said the City closed off the gate to the South Pool for two reasons, to restrict public access over the July 4th holiday and, for some time prior, to keep people away from areas being sprayed for mesquite eradication.

Carl said he understood the gate was back open.  He added the City would continue to move to a system where citizens pay a fee for key access to various parts of Twin Buttes.  The City plans to give the public notice as it executes these moves.

Also, I ran across the RFP for a Recreational Use Plan for Twin Buttes Reservoir.  It does mention windsurfers as a key user group.  Look for public meetings at some point for the opportunity to give input.  Let's hope it rains before then.

Update 7-19-11:  City Council approved  "$39,450 for the development of a Parks & Recreation Master Plan and a Recreation Use Plan for the Twin Buttes Reservoir area. Texas Outdoors Consulting will compile the plan. The vote was unanimous."  Here's the beauty.  City Manager Harold Dominguez said city leaders don't have time to develop master plans, saying they have their hands full, "as it is."  Where there is no vision, the people perish.
Posted by PEU Report/State of the Division at 11:27 AM No comments: