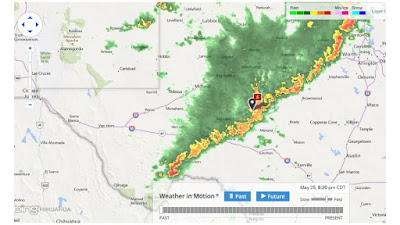 A flash flood warning is in effect until 10:30 pm.  It remains to be seen how much water ends up in area lakes and reservoirs.  The news reported many people without power as well.  Pray for safety in the midst of the blessing of rain.
Posted by PEU Report/State of the Division at 7:28 PM 2 comments: 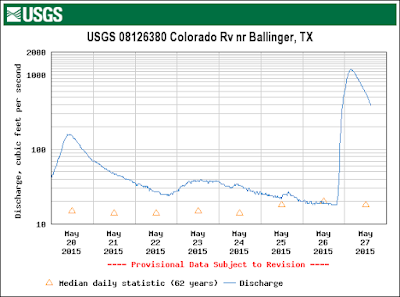 The Colorado River flowed heavy last night and today from last night's rains.  This should end up in Lake Ivie and produce drinking water for Abilene, San Angelo and Midland.  We'll see how much. 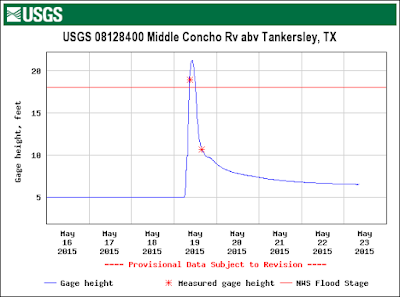 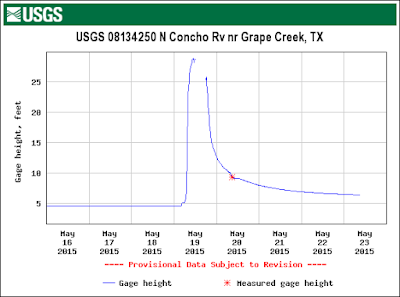 Rains turned our mud puddle into an actual lake.  It's a blessing!
Posted by PEU Report/State of the Division at 7:26 AM No comments: 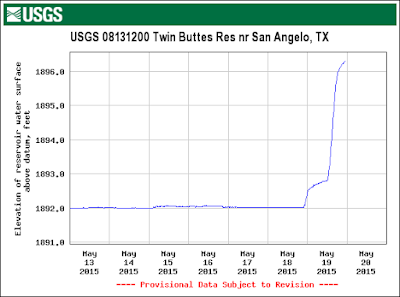 Overnight rains impacted the Middle Concho River the most, while slight rises occurred in the South Concho, Spring Creek and Dove Creek. The street in front of my house put at least 100 acre feet in Lake Nasworthy (my guess). I've never seen it that high in nearly twenty years. I windsurfed Twin Buttes North Pool on Saturday and my daggerboard scapped bottom in several locations. I look forward to seeing the impact of Middle Concho River flow on the North Pool. Thank heaven for this blessing.
Posted by PEU Report/State of the Division at 5:56 AM No comments:

New Water Board Has One Tall Tale 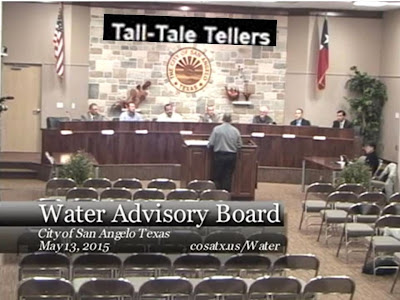 San Angelo Live reported on the first meeting of the new Water Advisory Board with our new Water Utilities Director.  :

Bill Riley, being the City of San Angelo Water Utilities Director and most informed and seasoned in the expertise of the city's water situation,...

I'm sure Mr. Riley knows water.  I find it hard to believe he is the most informed regarding San Angelo's water situation given its history under former Water Chiefs Will Wilde and Ricky Dickson.

Lake Spence, which is also supposed to supply the city water supply, is virtually dry right now, and hasn’t captured any significant gain in the last couple of years, taking Spence out of the equation.

Lake E.V. Spence has more water than Twin Buttes, 14,770 acre feet  vs. 9,427according to the Texas Water Development Board.  It is up nearly 6,000 acre feet in the last month   As for the last couple of years Spence held 30,000 acre feet in 2013.  Besides being wrong on Spence's water volume, Mr. Riley and San Angelo Live are missing the most basic fact as to why we get no water directly from Lake Spence.  The city's pipeline no longer works.

In justifying the Hickory Aquifer pipeline construction to a former Water Board in July 2009 minutes showed.

Mr. Wilde stated the Lake Spence water supply pipeline has experience problems and issues, primarily due to the materials used; therefore not a viable water source.

When the city updated its website it lost a rich trove of documents, including the link to this statement.  I don't fault Mr. Riley or San Angelo Live for not knowing.  Consider this their opportunity to learn.
Posted by PEU Report/State of the Division at 9:39 PM No comments: