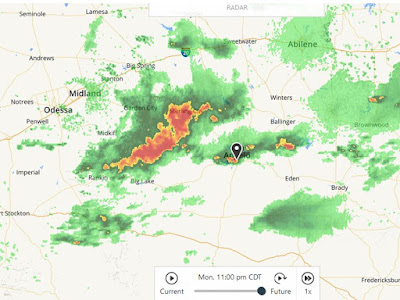 Lakes O.H. Ivie and E.V. Spence have been the beneficiaries of recent rains.  Spence took on 5,000 acre feet: 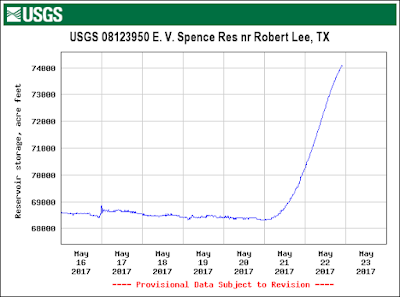 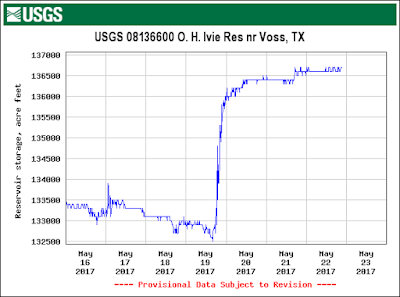 With storms in the area how much runoff might area lakes receive?  I'm cheering for Twin Buttes to continue its multiyear rise.  That would be a blessing.
Posted by PEU Report/State of the Division at 9:21 PM No comments:

Water's Up: City Service is Not 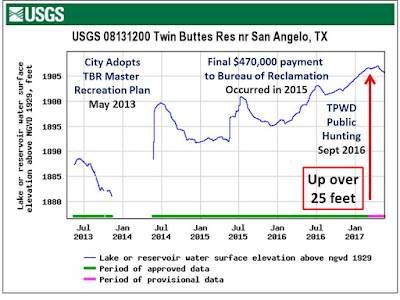 For decades San Angelo City officials said they would maintain areas around Twin Buttes Reservoir "when the water came up."  It's up over twenty five feet and there is no evidence of city plans to make improvements.

The city will have saved nearly $1 million for 2016 and 2017 as the annual Bureau of Reclamation payment for dam construction ended in 2015.  The city put none of those savings into the park.

It did contract Twin Buttes security to Texas Parks and Wildlife via the Public Hunting Program.  Citizens have been told "the park is treated bad because it looks bad."  Actually, it is treated bad by irresponsible users dumping and conducting illegal activities.

Twin Buttes has many responsible users who pack out their trash and pick up dangerous items left by others.  I know because I've done it for decades as an avid windsurfer and paddle boarder.  Other responsible user groups recreate at Twin Buttes, bird watchers, hunters, fisherman, off road enthusiasts, boaters, jet skiers, kayakers, disc golfers and more.  .

I admire TPWD Lt. Jason Huebner's energy and vision for Twin Buttes.  I had it once.  Hopefully, the city will make promises they can keep to him.   When I go out there I see the water's up and the city hasn't done jack to maintain areas around Twin Buttes.
Posted by PEU Report/State of the Division at 11:05 AM No comments: 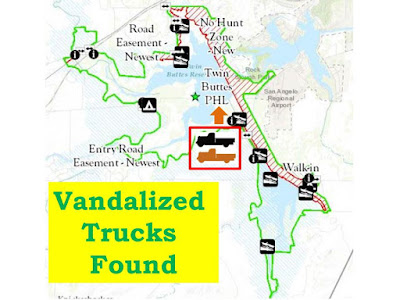 Two abandoned stolen trucks were recovered near the north side of the Equalization Chanel.  Both trucks’ interiors and exteriors were severely vandalized.

This is the no man's land the City of San Angelo allowed to exist for decades.   Texas Parks and Wildlife Officers have been contracted to reign in bad behavior at Twin Buttes Reservoir. I wish them luck.
Posted by PEU Report/State of the Division at 8:01 PM No comments: