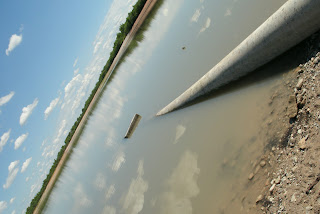 One the the three pumps at Twin Buttes South Pool stopped operating and another will likely do so before City Council meets July 2nd.  That means 25 fewer acre feet per day leaving the South Pool.  That will rise to 50 fewer acre feet when the second pump ceases. 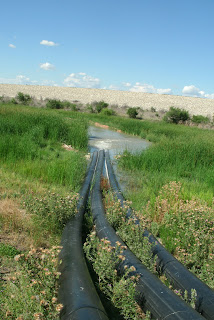 It's not clear how much of the pumped water makes it to the North Pool due to evaporation, seepage and vegetation.  Last year the loss rate was roughly 25%. 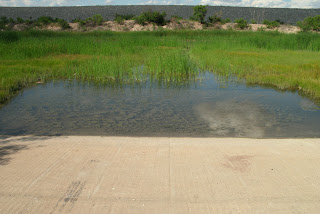 Will the city extend the pumps until the South Pool is empty? 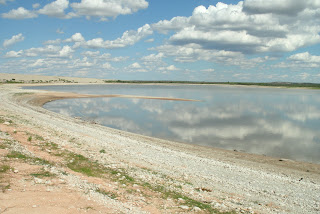 Will they move some to the North Pool to pump it from its soon to be "dead pool" status?  We may find answers from Water Chief Ricky Dickson on Tuesday.  Pray for rain.

Posted by PEU Report/State of the Division at 4:25 PM No comments: 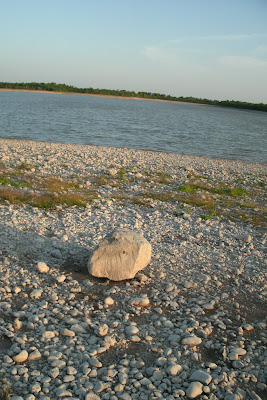 I ventured to the South Pool at Twin Buttes Reservoir to see lake levels after nearly 3 1/2 months of pumping.  It's a sad sight for those familiar with this body of water.  Small waves lapped the base of the rock seen above prior to pumping.  I would venture lake levels are six to eight feet below their March 1 level.  For two weeks in 2013 water naturally trickled through the Equalization Channel.  The view below is taken from the channel bed. 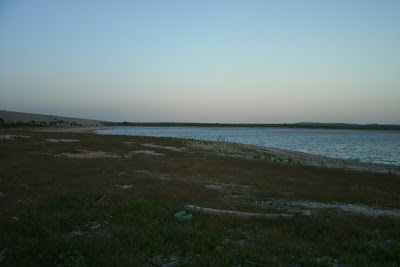 Twin Buttes' automated measurement system died in conjunction with pumping.  The Bureau of Reclamation looked at the North Pool gauge.  As the reservoir elevation got too low to read, they decided not to add anything for automated measurement.  A Bureau representative noted:

The City reads the pools manually, roughly once per month. The Bureau receives the readings monthly and expects to receive the June information shortly. This is not really tracked, just filed.

The City began pumping the South Pool on March 15 with water elevation near 1925 feet and the North Pool at 1888.87.  The reading above shows the City pumped nearly 1.5 feet from the South Pool to have the North Pool decline by 1.6 feet.  Nothing rose, as repeatedly promised by city officials. 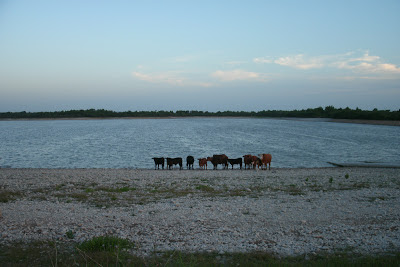 I'll post the new readings once they arrive.  I suggest no one hold their breath until the North Pool achieves its promised five foot rise.  Meanwhile, the South Pool is great for cows and their byproducts.
Posted by PEU Report/State of the Division at 8:02 PM 2 comments: 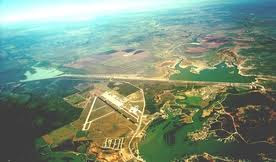 The last reading for Twin Buttes North Pool on the Bureau of Reclamation website was 5,933 acre feet.  The gauge would not read below that level and a new one is yet to be installed and activated for public reporting.   The South Pool had over 4,000 acre feet when pumping began in mid-March.   Depending on runoff and South Concho River flow the South Pool could be half full or less from nearly three months of pumping.

NOAA has the North Pool's elevation at 1,888.6 feet, some 52 feet below the dam's flood stage   Meanwhile the town of Barnhart ran out of water last week, in part due to heavy water use by oilfield companies.  The Texas Tribune reported:

John Nanny, an Irion County commissioner and an official with Barnhart’s water supply corporation, said on Thursday that the situation was serious.  Nanny said that the town was considering the possibility of getting a tank of freshwater from San Angelo, which is 50 miles away. Private wells were still supplying some water, he said.

When I asked San Angelo's Mayoral candidates about the oilfield's heavy water use, Councilman Hirschfeld cited the problem as regional.  It impacts San Angelo if every community west and north of us look to our dwindling water supplies to bail them out.  The proposed new reservoir north of Abilene would come on line too late to meet the water bulge required for fracking.

I'd venture fracking the Cline Shale will add a 15-20% greater load to our historical regional water use.   That based on the Eagle Ford's 5-7% increase in an area with more water resources.  Projections have the Cline drilling more wells than Eagle Ford.

I drove out to the North Pool last Wednesday to see its water level.  It's low, but I've seen it lower.  On the way out I noticed a large rectangular cat crossing the road.  I was on the main road in after turning from Highway 67 and about where the old pay building stood in the middle of the road when I spied the cat.  I slowed down hoping to make less noise.

It was a mountain lion.  The last one I'd seen was in Big Bend National Park.  The ranger said adolescent males left their mother after a few years in search of new territory.  These clumsy young males are the ones most often sighted.  In Big Bend I saw one resting under brush during the heat of the day.

The one last Wednesday turned its head in my direction, then moved quickly into the field.  There was no sign of it when I reached the spot where it took off.  I told a local veterinarian about the sighting.  He'd treated many a dog that lost it's encounter with a mountain lion.

When I moved to San Angelo in 1994 Twin Buttes struck me as the Wild, Wild West with its range of human behavior.  I realize it is the wild west in other ways as well.
Posted by PEU Report/State of the Division at 9:27 PM No comments: