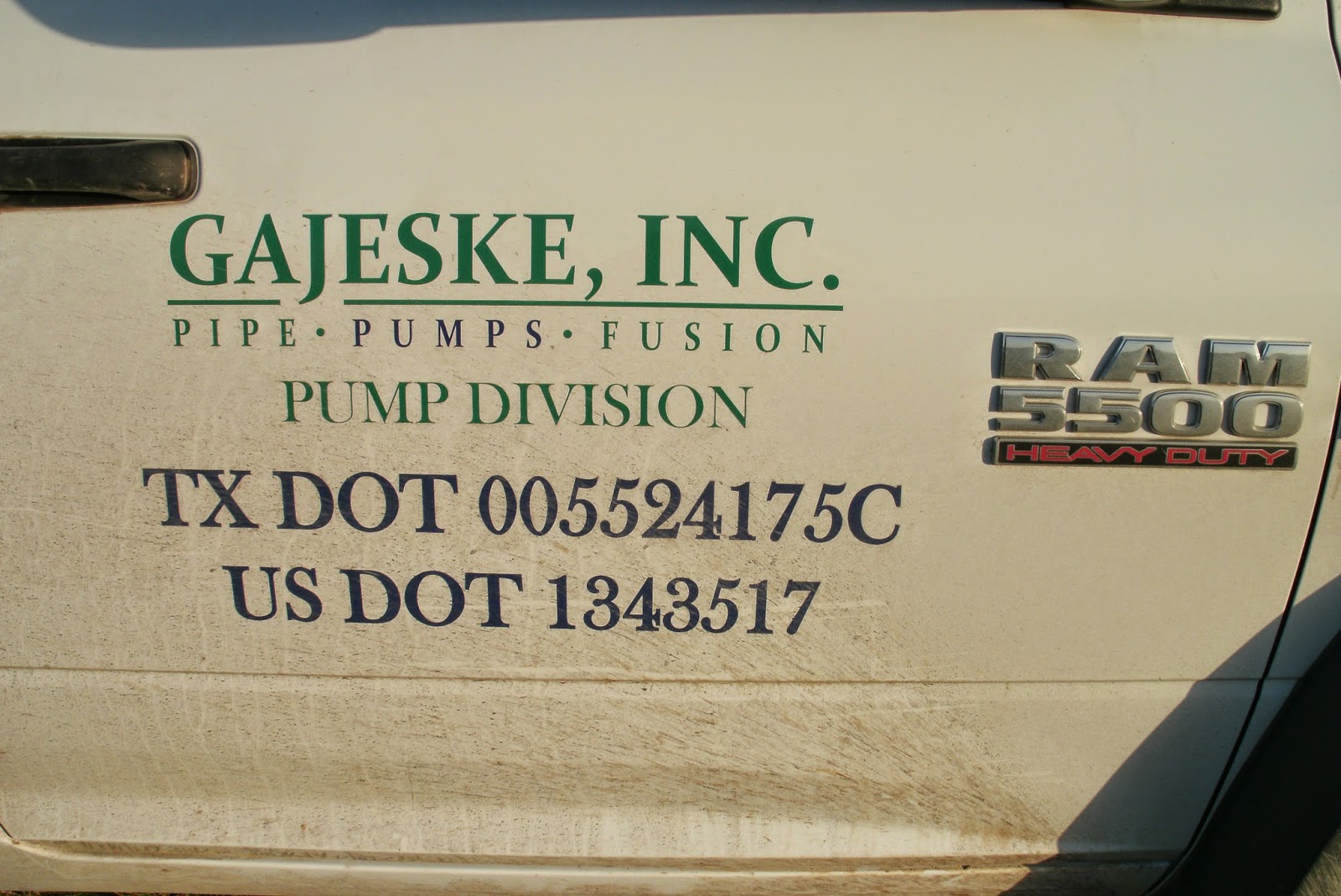 For the third year in a row the City of San Angelo will pump water from Twin Buttes' South Pool into the Equalization Channel.  The setup is a virtual repeat from 2012 and 2013. 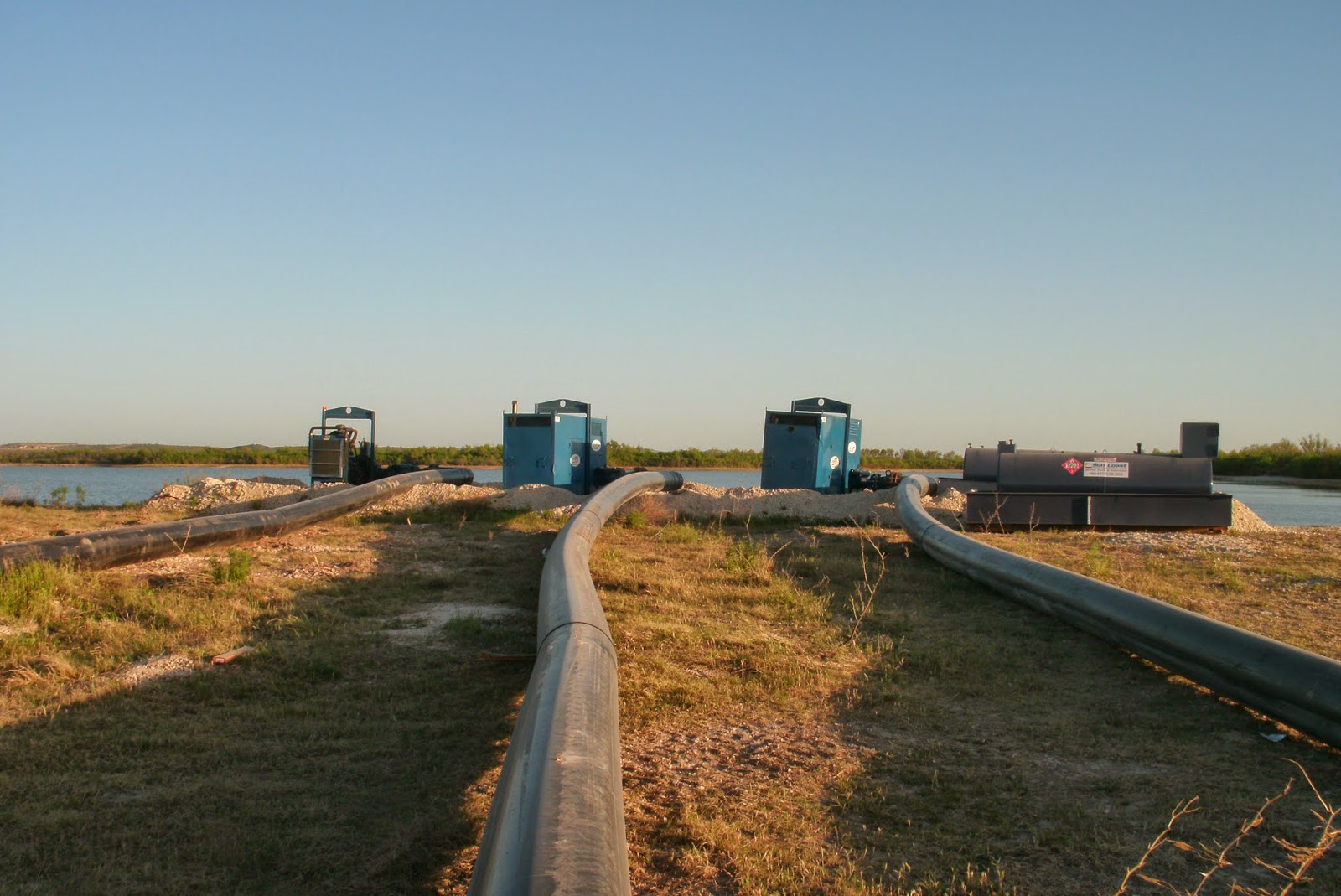 As of now there are no intake pipes leading into the water. 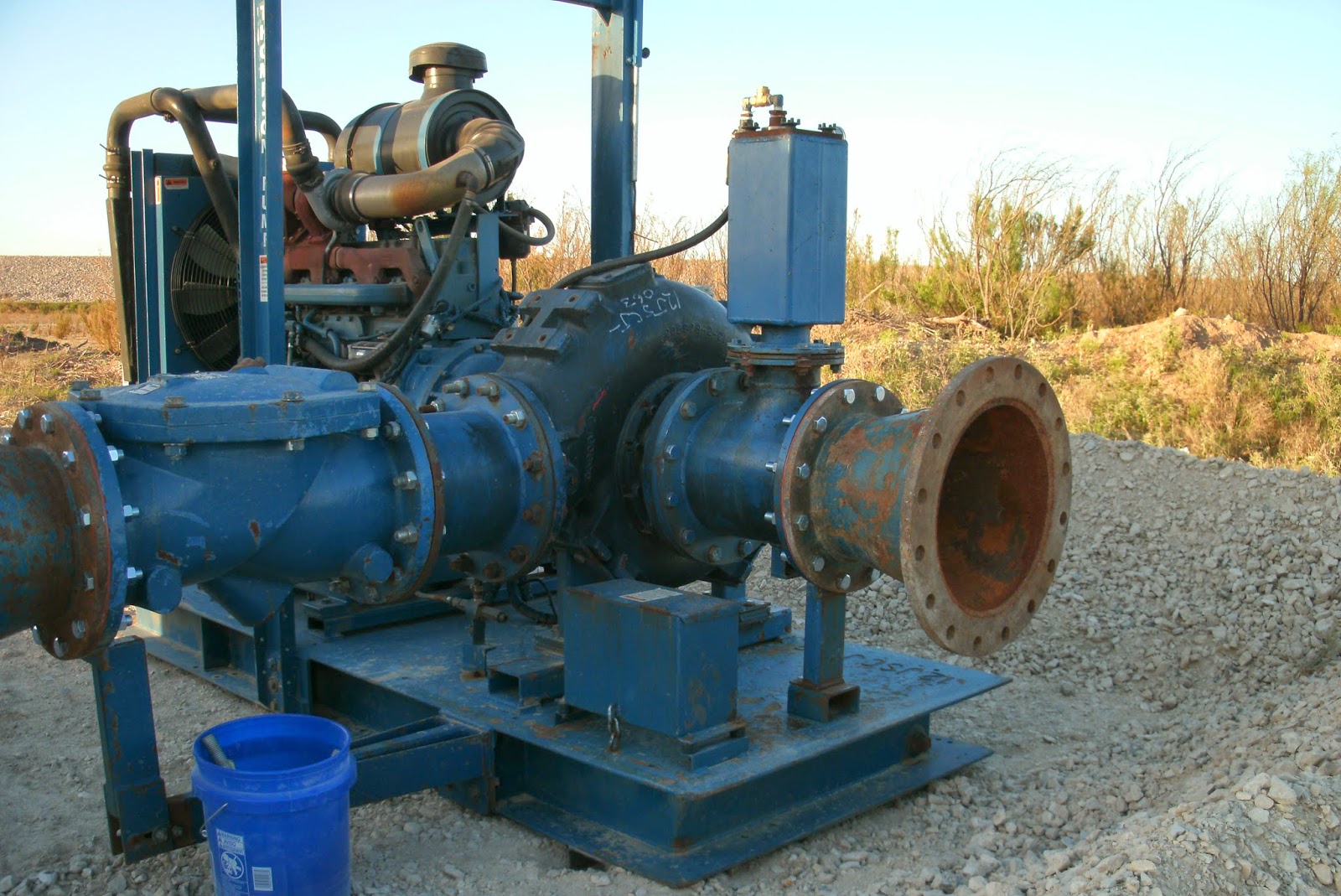 I'll post more pictures later.
Posted by PEU Report/State of the Division at 7:51 PM No comments:

Pumps Are Back at South Pool 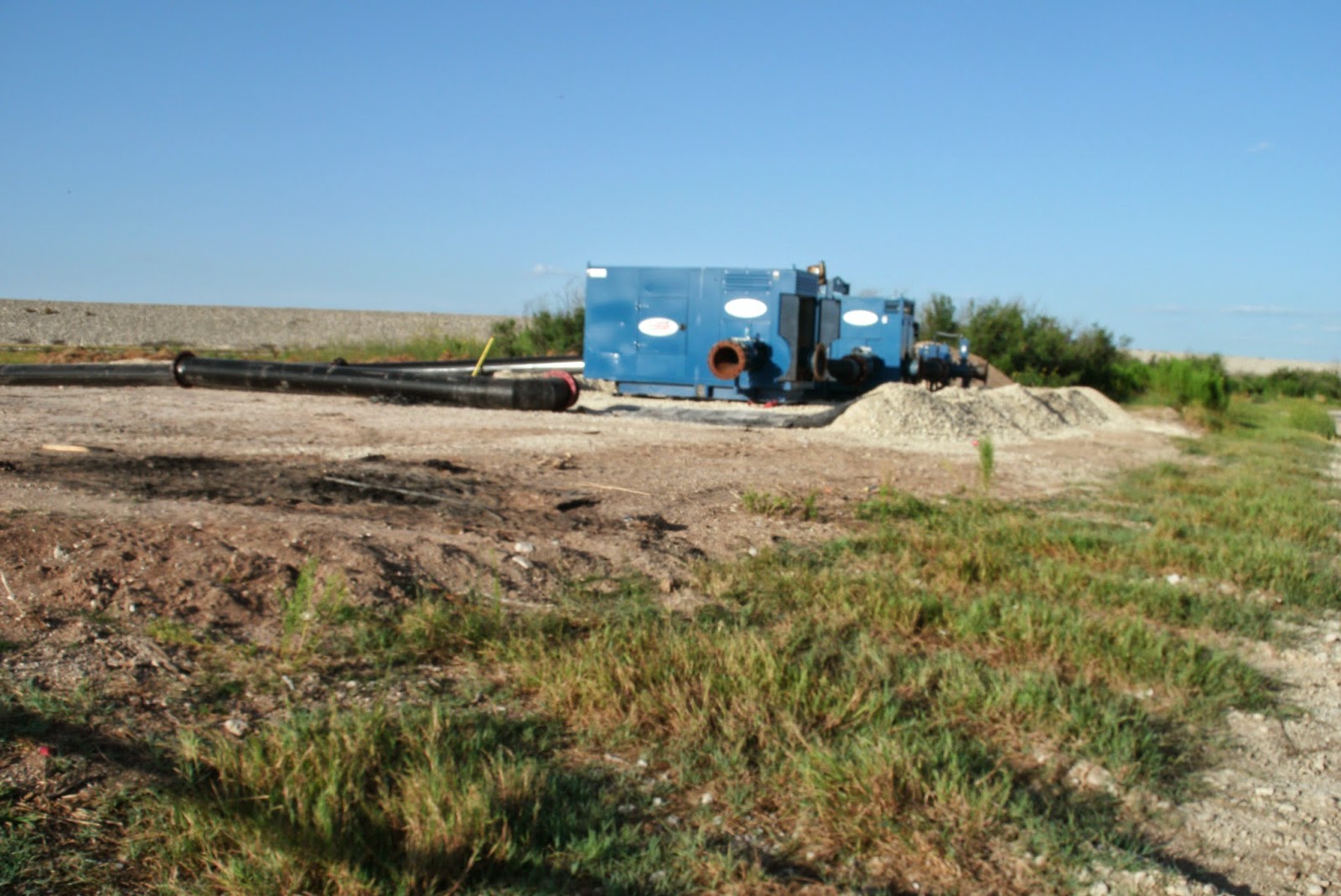 San Angelo Live picked up the City's rumored intent to pump the South Pool for the third year in a row.  City Council approved pumping in their April 1 consent agenda.  There was no discussion on the item.

I visited the South Pool today for recreation purposes, accessing the lake from a different entrance than San Angelo Live. The lake is up slightly to 1921.25 feet elevation.  The City's bid documents state they plan to pump ten feet out of the South Pool (down to elevation 1911 feet).  I don't think that's physically possible given the size of the pipes.  They might could get there with a straw.

Today I saw three pumps, along with three diesel tanks.  They're back in the spot they occupied the last two years (see picture from 2012 above). The scene today was distinctly more brown.

With no intake pipes going to the water another windsurfer and I were able to drive down the beach past the Equalization Channel to access the west wind.  I expect shoreline access to be reduced dramatically in the near future.

The wind blew today but it was highly variable, typical of our west winds.  I switched back and forth between a 110 liter and an 87 liter short board.  My sail size was 5.5 square meters, rigged flat, but it could've been 4.5 or 6.5, depending on the wind speed.

They weren't the roughest conditions I've windsurfed, but at times they were challenging.  I was glad to have someone else on the water today.  Age and the extra ballast I'm carrying made sailing a little tougher.  Can't do anything about the age but I can address the weight issue.  I'll do my darnedest to windsurf it off!
Posted by PEU Report/State of the Division at 6:44 PM No comments: 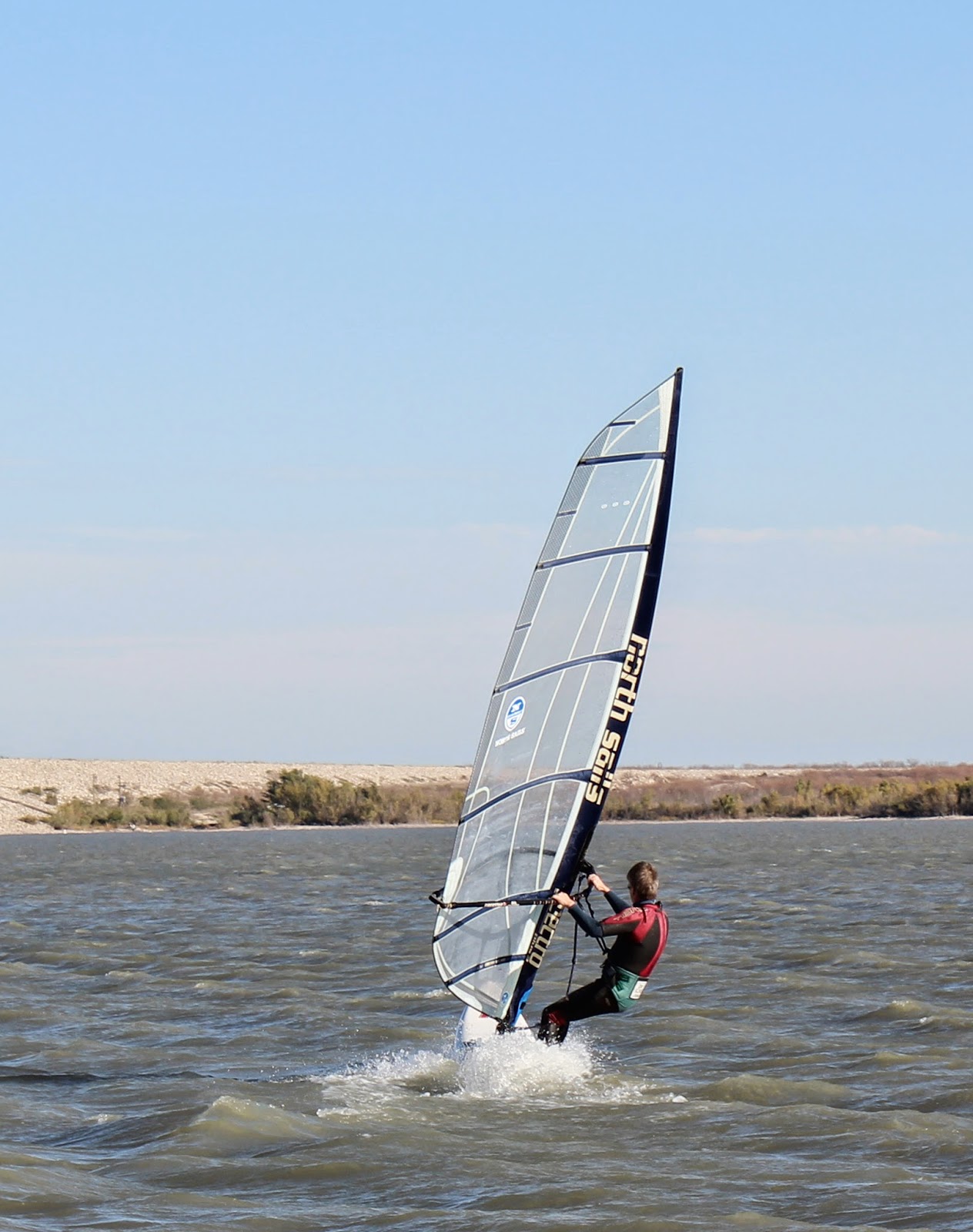 No pumps yet at the South Pool.  The water level keeps rising slightly.  I windsurfed  the South Pool today.  I rode a F2 130 liter shortboard and a 6.0 square meter North sail.  It was the right rig in the gusts.  I had a few runs that were about the fastest I've traversed the lake (parallel to the north shore).  Fortunately, I had company on the water.

A convertible wetsuit and a pair of old Okespor booties kept me comfortable.  Despite our colder than normal winter our shallow lake is turning warmer quickly.

There are a few skinny, thorny mesquites growing in the shallow water.  There's the usual broken glass, familiar to anyone who recreates at either the North or South Pool at Twin Buttes.

Waterfowl were out in force and I saw many fish jumping.  It was a great day to be outside and on the water.  It's not clear which method the city plans to use to pump the South Pool.  It'll either be the last two year's setup, three pumps with piping to the Equalization Channel or one pipe with three pumps over the dam to the South Concho River bed.

It's time to sail the South Pool, before the pumps reduce it again to a shallow mud hole.
Posted by PEU Report/State of the Division at 8:41 PM 1 comment: 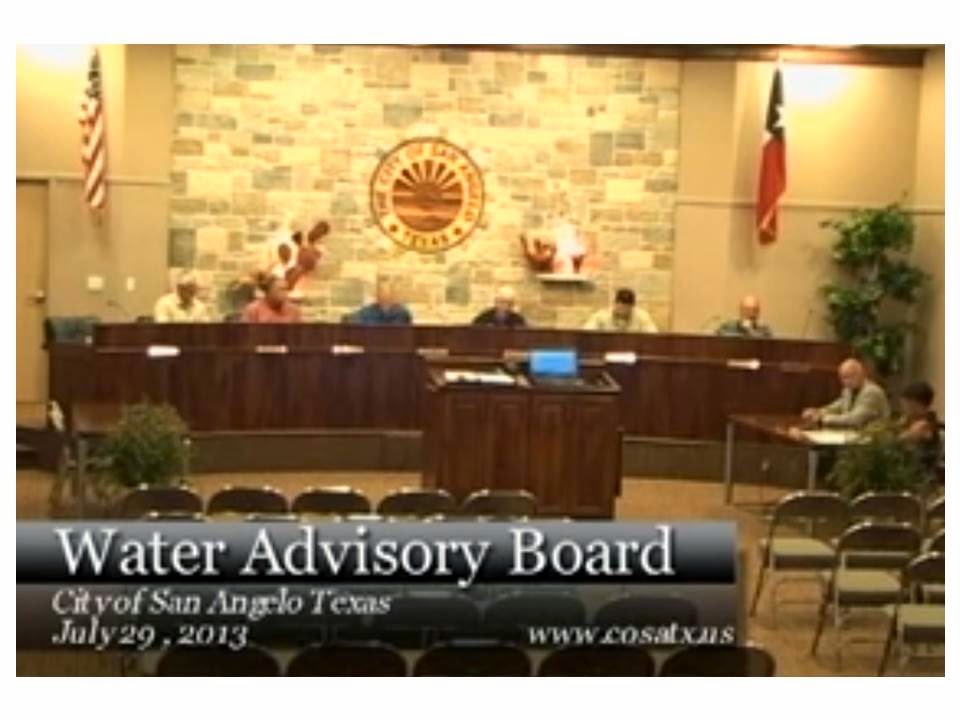 Former City Councilman Paul Alexander spoke during public comment at San Angelo's City Council meeting on April 1st.  He shared his longtime interest in water and his desire to impact local water supplies while on City Council.  He parlayed that into an appointment on the city's Water Advisory Board.

The Water Advisory Board is yet to meet since Alexander's appointment.  I searched the city's old website numerous times on the Water Advisory Board only to find it rarely met. The purpose the few times it met seemed to be to rubber stamp a decision by former Water Chief Will Wilde.  One of those was the selection of Carollo Engineering for the Hickory Project.

The board met once under new Water Chief Ricky Dickson to approve the bid for the well field expansion.  That was July 29, 2013. 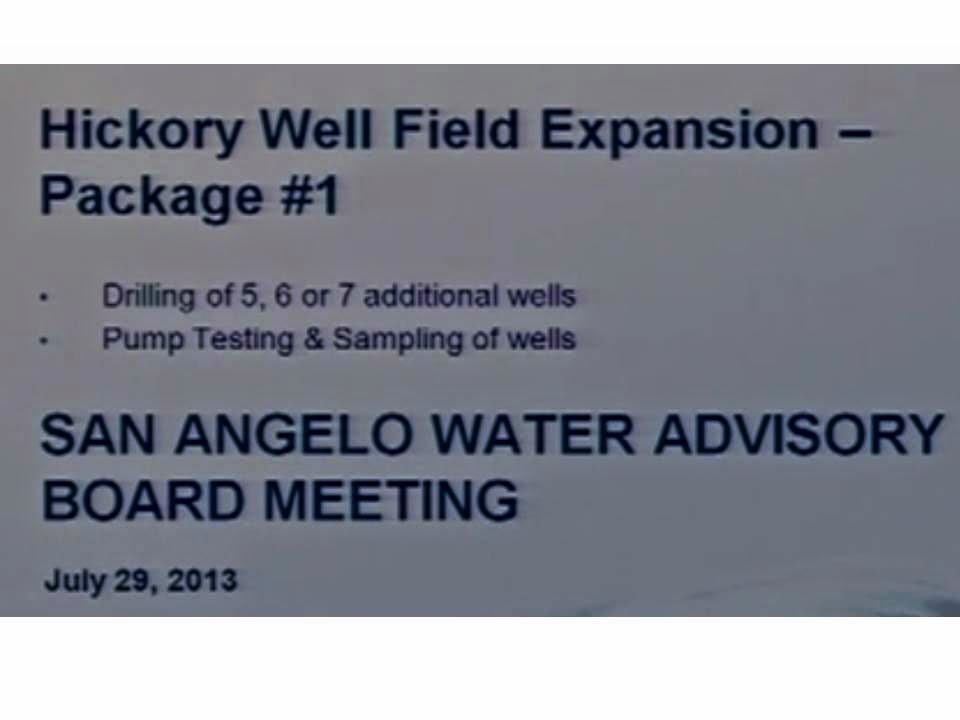 The city's new website shows no agendas under the Water Advisory Board archive. 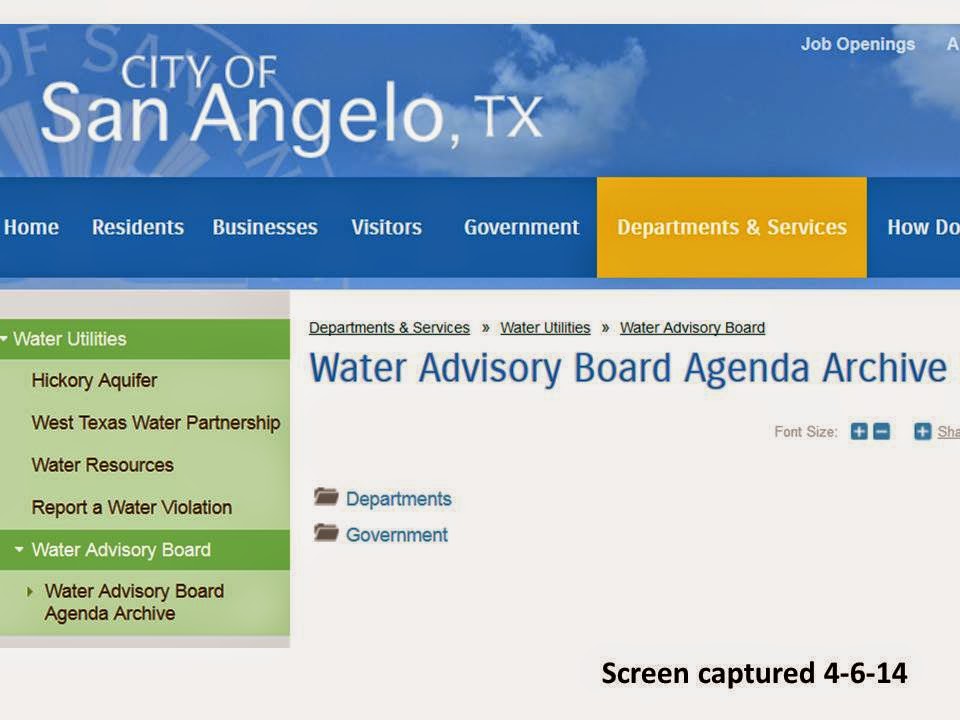 The new website is disadvantaged as older documents must be manually loaded.

The web has an article from 2003 and a brackish water use study from 2008.  Jim Turner at ConchoInfo raised Alexander's question a year ago.  Several weeks after his piece the Water Advisory Board met.

Piecing together the recent picture reveals the Water Advisory Board met in:


The city's YouTube site has a video from 2013 where UCRA consultant Stephen Brown predicted fall rains, such that Dickson would need a boat.  Unfortunately, that didn't happen.

The board with San Angelo's most important charge should be more than an annual rubber stamp.
Posted by PEU Report/State of the Division at 11:02 AM No comments: