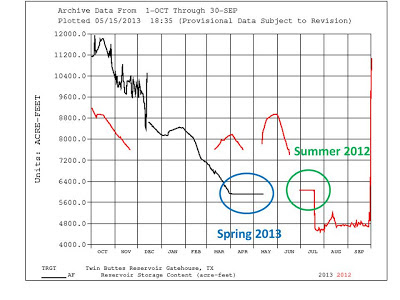 The City of San Angelo issued a press release on entering Drought Level 2:  It stated:

The City has for the last month been pumping water from Twin Buttes’ south pool into its north pool, where it can be released into Lake Nasworthy. Each of the three pumps in operation is capable of pumping about 25 acre-feet per day. An acre-foot is 325,851 gallons. Dickson initiated the pumping to raise the level of the north pool, thus ensuring Nasworthy’s level can be maintained as long as possible. Consolidating water into one pool also reduces the surface area exposed to evaporation and, thus, conserves water.

This scenario did not come true last summer when the City pumped water from the South Pool in early August.  The pool did not rise anywhere close to the promised five feet.  South Pool essentially water met San Angelo's daily water needs in August 2012.

These promises look similarly vacuous in Spring 2013, where after a month of pumping, the North Pool is yet to rise.  After a commenter posted the North Pool had a stuck gauge, I contacted the Bureau of Reclamation.  Here's the response:

It appears that the measurement station at the outlet works is having issues measuring below a certain elevation.  A temporary gauge may need to be installed to measure the elevation. We are taking a look at it and should resolve the issue soon

In other words, if the elevation were increasing the gauge could measure.  I hope to take pictures of both the South and North Pool soon.  I'll post them here.
Posted by PEU Report/State of the Division at 8:57 PM