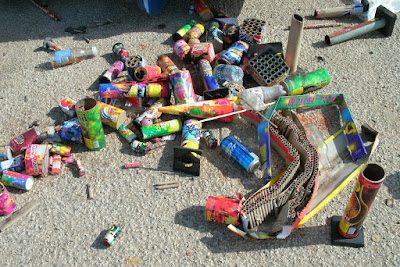 Thanks to recent rains, Tom Green County officials decided to keep the burn ban lifted for the Fourth of July weekend. As a result, residents will be able to set off fireworks outside the city limits and on private property.

To date the City has been silent on fireworks at Twin Buttes Reservoir.   Last year they told the public not to come to the Marina park and had a police cruiser at the turn off the Mertzon highway inspecting vehicles for banned fireworks.

The Bureau of Reclamation, which owns Twin Buttes Reservoir, does not allow fireworks period.  With the paper steering citizens outside city limits Twin Buttes may once again be abused.  I'm sure the park and lake appreciated the break from its annual trashing.

I'm hopeful the city will take action to prevent the widespread trashing of one natural resource.  Their silence to date has me concerned.  Look for a report here on the status of fireworks trash at Twin Buttes.
Posted by PEU Report/State of the Division at 9:07 PM