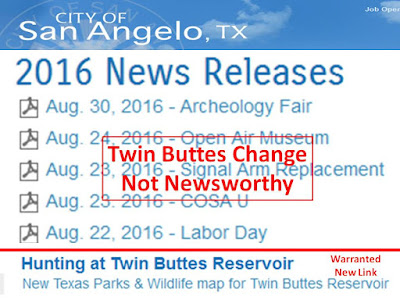 The City of San Angelo failed to inform citizens of their responsibility to purchase permits from Texas Parks and Wildlife to access Twin Buttes Reservoir property.  The program began September 1, just before the Labor Day Weekend.

It's currently unclear what the city's role (if any) will be as the new TPWD management plan goes in effect. Although I emailed the city manager and the Parks and Recreation director several questions related to the new plan and the city's role during implementation, neither of those officials chose to respond.

During presentations in 2015 and 2016 leading up to the agreement with TPWD, the city's Parks and Recreation director noted that "I don't think we're doing a very good job of managing those properties" and described the area (which was still under city management) as being "like a No Man's Land or the Wild West."

Parks Chief Carl White referred to the city's dealings with Twin Buttes as "a little hands off."   He used those words with City Council last year.  The city remains hands off by not informing citizens of changes and actions they need to take to comply.  Putting a link to the TPWD's new hunting map does not help non-hunters understand the changes and their need to buy an annual permit to be on Twin Buttes lands. 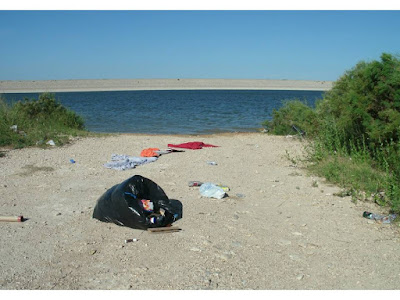 The 2015 San Angelo Living insert in the Standard Times marketed Twin Buttes as having chemical toilets (removed over a decade ago) and camper hookups (no longer working and inside pipe rail).  Management of this park is the city's responsibility.  That includes accurately representing what's there.

Will TPWD's Hunting Program reverse the city's near abandonment of responsibility for managing Twin Buttes?   I don't see TPWD officers hauling plastic bags full of used diapers, needles or oil filters.  I don't see them cleaning up dumped brush or trash left after a holiday weekend.

I'd like to know how officers will steer park users on toileting. The city received a $50,000 TPWD grant years ago to put in a new boat ramp and restrooms.  The boat ramp appeared but not the restrooms.

The city's silence on Twin Buttes covers multiple fronts.  There's been no discussion of plans for Twin Buttes in the city's 2016-2017 Strategic Planning/Budget sessions.

The city has long ignored their responsibilities to manage and maintain the park at Twin Buttes.  I'm grateful for an enforcement presence at Twin Buttes, but that can only do much to improve the park experience for local recreational users.  I look forward to seeing the permit program's impact and hearing the city's plans to deal with non-enforcement concerns, like sanitation and regular cleanup.

Update 9-18-16:  Still no word from the city on the change but the Standard Times ran a story about it on Labor Day/
Posted by PEU Report/State of the Division at 10:21 PM