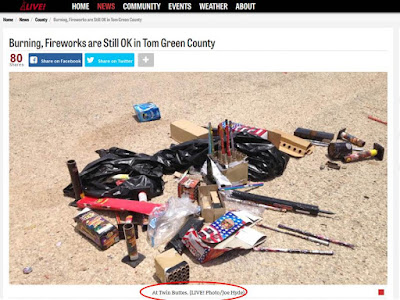 The City's July 4th holiday press release is silent on the subject of fireworks.  Two years ago the city spoke clearly on this issue.   Last year Concho Valley Homepage did a story on legal fireworks use.

Those wanting to shoot off fireworks will go somewhere. It remains to be seen how the city's relative silence and Live's implying fireworks are OK at Twin Buttes will pan out.  Historically, it's been the annual trashing of Twin Buttes.

Hubener just led a successful trash pickup for both pools at Twin Buttes.  Let's hope we don't need Round 2 after celebrating our nation's birth.

Update 7-12-17:  Fox reported less trash at Twin Buttes than in prior years but their story reveals a different concern, people placing human waste in park trash receptacles.  Twin Buttes master plan meetings in 2012 indicated a need for public restrooms and the city received a TPWD grant for new restrooms and a boat ramp.  It only installed the boat ramp.  A public park should provide basics for a family to spend the day, much less camp (like the city recently invited the public to do so via a Standard Times insert.)
Posted by PEU Report/State of the Division at 2:19 PM