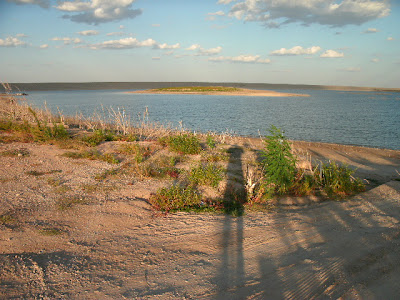 The City of San Angelo closed bidding today on proposals for the lease of pumping equipment and portable pipelines.

The pumps will be used to withdraw water from the dead storage pools in Twin Buttes Reservoir, Tom Green County, Texas. The system should be capable of achieving flows of approximately 25 million gallons per day.

San Angelo uses an average of 14mm gallons each day. (In the winter, we use about 10mm gallons/day

It remains to be seen how the city plans to use these pumps.  They've used pumps in the North Pool to get water through the dry gates.  I'm not aware of pumps being used at the South Pool in the past, although Councilman Paul Alexander floated that idea in 2011.

Provide a detailed description and pricing for the proposed pumping system. The lease period will be for at least 60 days and will be extended on a month-to-month basis thereafter. The pricing schedule shall include at a minimum the following:

Bidders may want to check the city's history with pumps and diesel spills. COSA got in trouble for not reporting such in the past.

My hope is the rains come and the South Concho flows.  I windsurfed two weeks ago at the South Pool and the water was up, close to flowing into the Equalization Channel.  The North Pool is way below the South elevation wise, so pumping may remain necessary.

I do think it's better to refer to San Angelo's drinking water source as something other than a dead pool.

Update 2-7-12:  COSA posted Addendum ! and Addendum 2 for the project.  The deadline changed to February 23.
Posted by PEU Report/State of the Division at 9:25 PM