February Water Use Doesn't Add Up 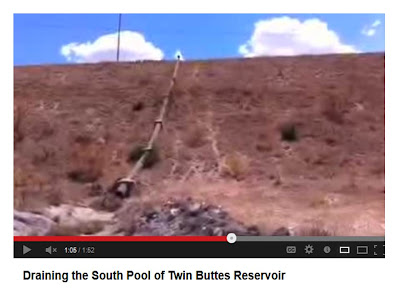 Twin Buttes Reservoir stood 1,225 acre feet emptier at the end of February.  The Bureau of Reclamation's February statistics said no water was lost to seepage or evaporation.  None went for Irrigation releases.

Bureau statistics show Twin Buttes released 737 acre feet, 359 for municipal use and 378 acre feet to maintain Lake Nasworthy's water level.  What happened to the other 488 acre feet, almost 40% of the decrease?  The Bureau's website had no data under the Prior Rights category for 2013, but that had been at zero for the last five years,.

Weather doesn't appear to have been a factor, given cool temperatures and little rain:


How did 488 acre feet of Twin Buttes water disappear?  Surely the Bureau of Reclamation and the City of San Angelo have some idea as to what happened to missing 40%.  It could be a hole in the Bureau's numbers, given they built a leaky dam.  Then again, it could be something else.  How long before Water leaders shed light on this situation? 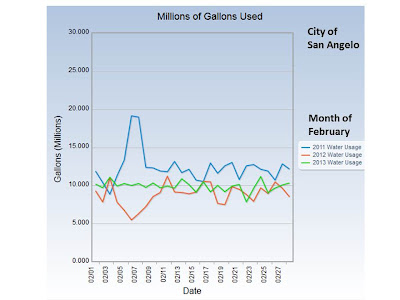 Update 4-21-13:  The City used roughly 858 acre feet in February.  Obviously, some of that water came from another source, Lake Ivie, Spence, but certainly not O.C. Fisher.
Posted by PEU Report/State of the Division at 8:25 AM