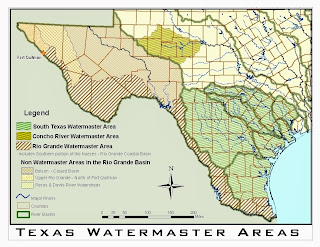 The following letter was published in Livestock Weekly and the author gave permission to run it on Twin Buttes Reservoir:

Thank you for including an update regarding the TCEQ watermaster program and the Texas Farm Bureau lawsuit on the Brazos River. Coincidentally, there have recently been two letters to the editor regarding opposing viewpoints concerning the authority of the TCEQ over our neighbors on the San Saba River and Bear Creek. There appears to be a growing backlash to the watermaster program across the state, which can be confusing since their advertised role is to “ensure compliance with water rights by monitoring stream flows, lake levels, and water use”.

Through our ongoing drouth, the TCEQ’s alleged shift from protecting senior water rights to prioritizing junior municipalities, power generators and golf courses has brewed real discord along the river. Additionally, the watermaster program, which the papered water rights holders are forced to fund, serves as a landscape help line, policing a broad interpretation of the “domestic and livestock riparian water right” to include irrigating acres of lush St. Augustine grass for mowing, as a priority over historical, appropriated use.

I think Livestock Weekly readers would benefit from an article detailing the long-running Concho Watermaster program, also headquartered at San Angelo. The TCEQ Concho River Watermaster program is only on its third watermaster, survives despite its ability to ignore unlawful acts, even has a local farmer-group lawsuit currently pending in district court, and the whole story occurs in Livestock Weekly’s back yard.

I want to warn that the water situation at San Angelo is complicated, and your reporters may have some difficulty navigating the details. And since the TCEQ has recently fortified their San Angelo offices behind an electronic locking door from their newly remodeled public waiting room, complete with a stainless payment slot at the bottom of a new bulletproof, bank teller-style window which might as well sport a sign that reads “No Service”, I’ll offer a few pointers.

The main problem for this article is how do you accurately explain that Twin Buttes Reservoir is actually two lakes, collecting two major watersheds, with its two separate “pools” located three miles apart? Twin Buttes’ two “pools” are connected by a dirt “equalization channel,” but built with only a single outlet for the whole lake system, resulting in the illegal termination of the South Concho River, outside of flood events. Then you’d have to explain how San Angelo’s responsible for laundering the South Concho River’s streamflow into the south pool by releasing an equivalent amount of north pool water out of Twin Buttes’ only outlet, as calculated by the USGS streamflow gauge at Christoval.

And if you bring up the USGS gauge at Christoval, you’d have to report that out of the thousands of streamflow gauges operated by the USGS, the gauge at Christoval is the only gauge USGS funds which reads half the river, due to its location 300 feet downstream of the 115 year-old South Concho Irrigation Canal’s dam and constant flow headgate.

So the story would return to Twin Buttes Reservoir, where we’d look to the Bureau of Reclamation’s subcontractor in charge of monitoring the lake(s), which, in an odd case of the fox being in charge of the hen house, turns out to be the City of San Angelo and their unique, federally funded “lake operations” division of the San Angelo Water department. In another helpful exemption by the first Concho River watermaster, the City of San Angelo’s streamflow responsibility was moved to the beginning of town, as the rivers enter city limits, because, unlike the rest of Texas, which is responsible for streamflow until the river leaves the city/property limits, because … (insert any fathomable, nefarious, whiney reason here, because the reason doesn’t matter). What matters is that regardless of why, regardless of historic water use laws, and regardless of reality, the TCEQ Concho watermaster makes all of this possible.

Before the Concho watermaster, when San Angelo faced water shortages, the city paid senior water rights not to pump. Now the watermaster enforces “curtailments” on senior ag users to benefit municipalities without the need for municipalities compensating senior water rights holders. The TCEQ has its sights on controlling all of the surface water in the state, and without better producer communication, we are going to pay to have our own throats cut. I’m optimistic that the Brazos River TCEQ article, as well as a few timely letters to the editor, could prime the pump for future investigative reporting by Livestock Weekly on the uneven playing field which we are beginning to recognize as the TCEQ watermaster program.