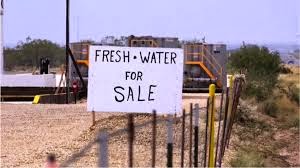 Governor Rick Perry issued a disaster proclamation January 14, 2014 due to drought in 121 Texas counties.  The Concho Valley is well represented in Perry's decree.

A new report finds that hydraulic fracturing is posing a growing risk to water supplies in several regions around the country. Only, instead of groundwater contamination that so often makes the headlines, it is from the massive consumption of fresh water in water-parched areas like Texas, Colorado, and California. Hydraulic fracturing (“fracking”) requires millions of gallons of water to frack single well, and in places that are suffering epic droughts, fracking is increasingly competing for access to water with other uses.

The report, “Hydraulic Fracturing and Water Stress,” comes from Ceres, a network of investors, companies, and public interest groups that pushes investor money towards sustainable practices. Ceres finds that about three-quarters of all the 39,294 wells hydraulically fractured between January 2011 and May 2013 (the time period they studied) have occurred in water scarce areas, and more than half in areas suffering from drought.

Nowhere is the nexus of fracking and water starker than in the Eagle Ford Shale in south Texas, which produces over 1.2 million barrels of oil and 6 billion cubic feet of natural gas per day. The Eagle Ford suffers from the biggest water challenges out of any shale play in the United States. It has the highest water consumption out of any other shale formation in the country right now. Over 90% of the water used in the affected counties comes from groundwater, as opposed to surface water, contributing to the depletion of aquifers.

The report finds that, “Texas is ground zero for water sourcing risks due to intense shale energy production in recent years.” And the problem of water use is compounded by the fact that Texas has been suffering from several years of meager rainfall. As Ceres notes, “over two-thirds of Texas continues to experience drought conditions, key groundwater aquifers are under stress and the state’s population is growing.”

Agriculture and the consumption of water in cities remain the largest sources of water consumption, much more than fracking, but drilling for oil and gas often occur in small communities in dry areas, and thus have an outsized influence over the consumption pattern of water. Competing interests, such as cattle ranching, farming, other industry, and residential use, are finding water more and more a cherished commodity to come by. There are 29 communities in Texas with a presence of oil and gas drilling that are in danger of running out of water within days.

Ceres also looked at individual companies with the most exposure to water sourcing risk. For example, Anadarko Petroleum (NYSE: APC) leads the pack with more than 70% of its wells located in high water stress areas. Anadarko used over six billion gallons of water over the study period. Chesapeake Energy (NYSE: CHK) was the biggest user of water out of all the operators measured in the report, but with much of its drilling operations focused in the relatively wet Marcellus Shale, its risk exposure wasn’t as bad as Anadarko’s. The report offers a warning to investors: should these companies be cut off from access to water due to inadequate water supply or water restrictions by local governments, their operations – and therefore their profitability – could be put at risk.

The Ceres report provides a series of recommendations which include recycling of water used during fracking (a practice already becoming more commonplace among drillers); using wastewater or brackish water; disclosing more information, not only on water use from the company perspective, but also on water availability and requirements for the basin as a whole; and tougher regulations governing the use of water in dry regions.

The competition between water use for fracking and other uses is not new, particularly in dry areas, but with oil and gas production in Texas expected to double over the next five years, the issue will only grow in its importance.

Local aquifer levels in the Eagle Ford formation have dropped by up to 300ft over the last few years.


The Wolfcamp and Cline Shales are in even more water blighted areas than Eagle Ford.  I'm going to need wheels for my windsurfers.
Posted by PEU Report/State of the Division at 8:14 PM