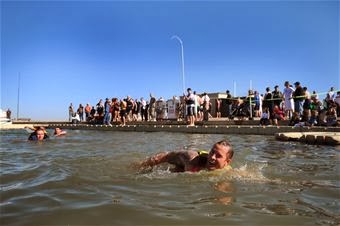 With his 5-year-old daughter under one arm, Brian Weitz swam in 34-degree water to the dock where volunteers stood with towels.

Although the water left many swimmers gasping when they finished, air temperatures reached the low 70s.

“This is the warmest day we’ve had for a polar bear plunge in a long time,” Gilbert said.

It's also the coldest water in a long time.  Many winters in the last twenty years the water dropped to the low to mid 40's.  Mild winters saw water temperatures in the 50's. At least that's been my experience with winter windsurfing on San Angelo's lakes.  This is the winter to sit out.
Posted by PEU Report/State of the Division at 7:51 PM