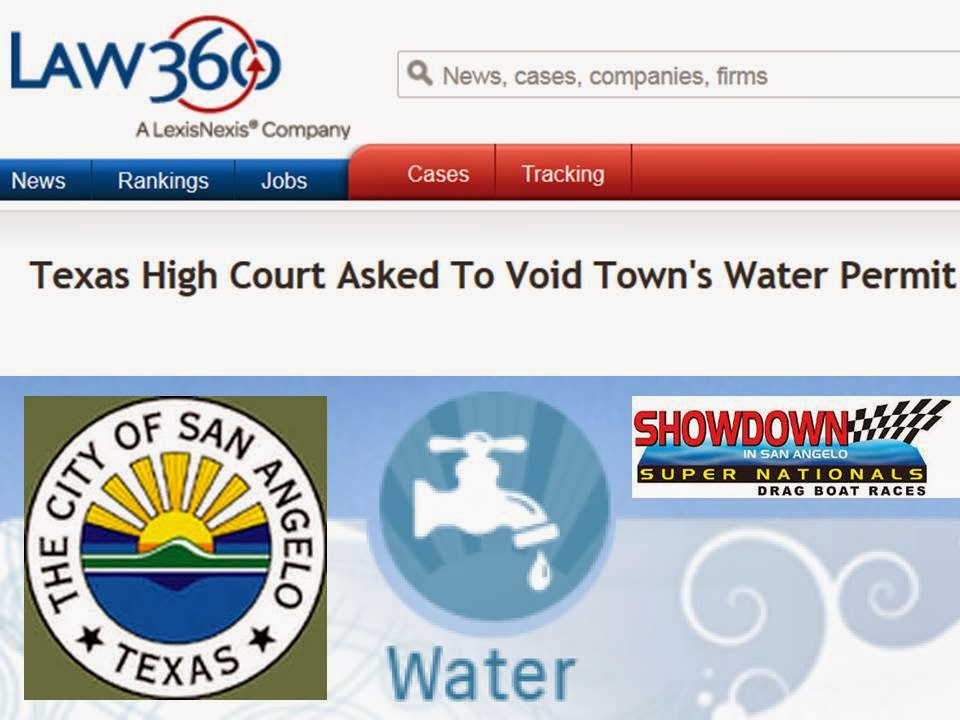 Houston (February 19, 2014, 4:32 PM ET) -- A conservation group asked the Texas Supreme Court Tuesday to invalidate the city of San Angelo’s municipal water permit, arguing that state regulators should have more closely scrutinized the impact the permit would have on the environment and downstream users.

In a petition for review filed with the high court, the Concho River Basin Water Conservancy Association said that the Texas Commission on Environmental Quality should not have approved an amendment of the city’s existing water permit without first determining whether the change would unduly strain water supplies or adversely affect the rights of other water rights holders.

“Without requiring the proper [analysis], the commission amended the city’s water rights, stripping away existing special conditions designed to protect other water rights and the on-stream environment,” the petition said.

Concho — a nonprofit group formed to protect water rights tied to a tributary of the Colorado River — says that TCEQ should have considered how amending the city’s permit would impact the basin and others who rely on the water source under the Texas Water Code and state administrative law.

Because the city was not required by TCEQ to satisfy the so-called “no injury rule,” the permit amendment was improperly approved, Concho says. The Seventh District Court of Appeals also erred when it misinterpreted the high court’s decision in City of Marshall v. City of Uncertain and held that the TCEQ only needed to consider the public welfare, groundwater effects and consistency with state water plans before amending the permit, according to Concho.

“This error amplifies the commission's error in failing to acknowledge that its witness only provided an unsubstantiated and conclusory expert opinion that there were no adverse impacts caused by [the permit amendment] and did not perform the required no injury analysis,” the petition said.

And Concho says that the TCEQ should have compared the city’s original permit conditions with those of the amendment to conduct the appropriate analysis under the no injury rule. Instead, TCEQ took the “novel” position that a comparison was unnecessary because the amendment only operated to delete an outdated provision authorizing the city to store and release storm water, according to Concho.

TCEQ successfully argued to the lower appeals court that the state’s Water Rights Adjudication Act eliminated the distinction between “storm and flood flow” and “normal flow” of a river and that the city’s water permit amendment did nothing more than clarify its existing rights.

But Concho says that there is no case law to support TCEQ’s argument and notes that the Water Code and TCEQ’s own regulations still refer to the difference between storm flow and normal flow.

“It is incorrect that the Adjudication Act ‘did away’ with the normal-flood flow distinction for all purposes,” the petition said. “The appeals court failed to reach this issue and petitioner requests the court to grant this petition to address this issue, which is critical to the water law jurisprudence of the state.”

Concho contested San Angelo’s permit when the amendment was up for debate at the TCEQ, and sued in state court after the agency found the permit amendment would result in no adverse impact on other water rights.

The dispute revolves around water rights the city secured dating back to a 1960 permit that allowed the city to construct the Twin Buttes dam and reservoir and several subsequent amendments to the permit governing the amount of water San Angelo could draw down.

Concho is represented by Glenn Jarvis of the Law Offices Of Glenn Jarvis and Mary K. Sahs of Sahs & Associates PC.

--Additional reporting by Jess Davis. Editing by Emily Kokoll
Posted by PEU Report/State of the Division at 2:27 PM