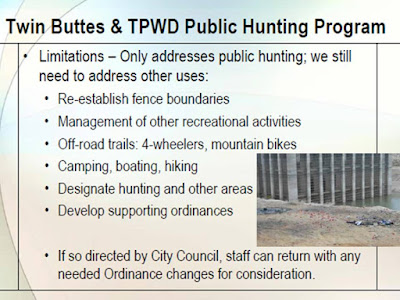 It's not clear how citizens will pay these fees or how funds will be used to improve primitive conditions at Twin Buttes. 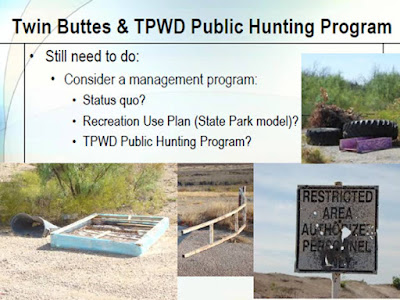 Other than closing Twin Buttes for public fireworks the July 4th weekend this is the first recreation item City Council has considered on Twin Buttes since adopting a Master Recreation Plan.  The plan was created in 2012 and officially approved by council in 2013.

Most city action at Twin Buttes since 2012 has been installing and removing pumps. My October water bill still has the "pumping fee" despite pumps having been removed in May of 2014.  I guess it's a perpetual fee.

The City recently played catch up by devoting another $4 million to San Angelo's Performing Arts Coalition, a project that has lingered since 2011.  I've long hoped Council would find the Twin Buttes project ripe for a kick start.  That hope will go on longer given Council materials state "there is no financial impact." Thus, staff recommends City Council stick to its miserly history in funding anything non-water at Twin Buttes.

Update 5-15-16:  City Council approved the TPWD Public Hunting Program in an April meeting.
Posted by PEU Report/State of the Division at 9:09 AM