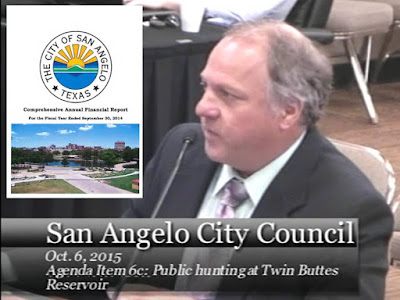 Project Name: Twin Buttes Dam and Reservoir (Twin Buttes) - Annual Payments of $450,000 to $470,000 are required through the year 2015 for the retirement of the contractor's debt. Total estimated payments are $16,327,293. The City is contractually obligated to operate and maintain the project storage works and the basic recreational facilities for the useful life of the project.

Payments will stop in 2016 finally freeing up money for the city to use on the Twin Buttes Master Recreation Plan.  The City can simply take the money it has been paying for Twin Buttes and use it to improve recreational conditions at Twin Buttes.

"To be honest I don't think we're doing a very good job of managing those properties right now.  It's a little hands off.  We think we need to improve that."