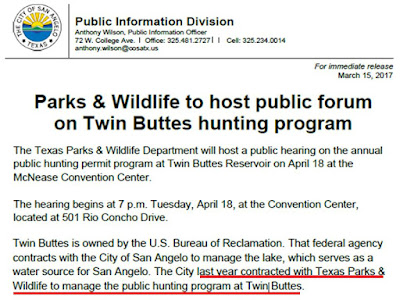 Having missed the public meeting on Twin Buttes Reservoir I was interested in viewing the slides from the three presenters, Lt. Jason Huebner of Texas Parks and Wildlife, a representative from the Bureau of Reclamation and a local off-road enthusiast who'd mapped the trails around the North Pool.  I assumed other citizens might want to view the presentations so I requested the city post the slides on its website.  City officials refused, saying they did not have access to the documents.

Twin Buttes is owned by the U.S. Bureau of Reclamation. That federal agency contracts with the City of San Angelo to manage the lake, which serves as a water source for San Angelo. The City last year contracted with Texas Parks & Wildlife to manage the public hunting program at Twin Buttes.

The meeting reiterated the City is responsible for lake maintenance and operations at Twin Buttes Reservoir.  So the responsible party who promoted, hosted and recorded the meeting does not have material on planned changes under its operational bailiwick?  The city has historical black marks in vendor management, so one might expect it to aspire to do better.  Not so.

the City does not have that main PowerPoint presentation, which was produced by and belong to the Texas Parks & Wildlife Department; Game Warden Lt. Jason Huebner.

Parks Chief Carl White confessed the City had been "hands off" at Twin Buttes for quite some time.  It remains that way on sharing basic information with members of the public who could not attend the Twin Buttes update last week.
Posted by PEU Report/State of the Division at 6:30 PM