The City of San Angelo is responsible for the maintenance and upkeep of the park on the north side of Twin Buttes North Pool.  Historically it's taken a "hand's off" approach to the park and all lands around Twin Buttes Reservoir.  That includes security and maintenance at Twin Buttes.

The city delegated management of lands for hunting, fishing and other recreational uses to Texas Department of Parks and Wildlife by participating in the public hunting program.  The city effectively subcontracted part of its responsibilities to TPWD.  This subcontractor led a public meeting the other night with other city, state and federal officials in attendance.


Lake Operations is responsible for the maintenance on and around Lake Nasworthy and Twin Buttes Reservoir. This includes: repair and upkeep of City-owned boat docks and ramps, watering and mowing of park facilities, removal of dead or diseased trees and planting of new trees, repair and/or replacement of buoys, emptying more than 200 trash cans on a regular basis, and brush abatement.

To report vandalism, contact the San Angelo Police Department at 325-481-2750


Two years ago the city banned fireworks in the park but relaxed that in 2016.  The total fireworks ban is back and is now year around.

Despite getting a TPWD grant for new restrooms and boat ramp years ago, the city only installed the boat ramp.  There are no public restrooms in the park and none nearby.

The city has a public face for Twin Buttes and it's Game Warden Huebner.  He won't pick up trash and he can't arrest bad actors, especially with only two game wardens in Tom Green County. 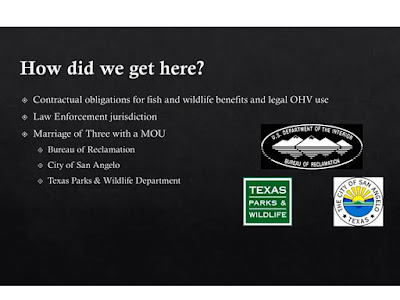 The City never mobilized the will or resources to manage its contractual responsibilities at Twin Buttes Reservoir.  It entered into a contract with a group that may have the will but admits it doesn't have the resources.
Posted by PEU Report/State of the Division at 9:58 PM