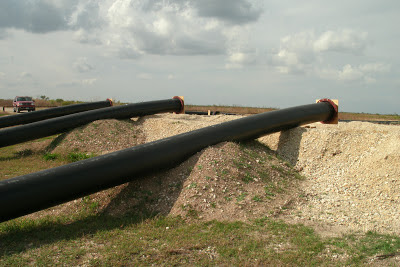 San Angelo City Council will take up pumping water from the South Pool into the North Pool at Twin Buttes Reservoir.

14.  Discussion of and possible action related to the transfer of water from the south pool to the north pool for the City’s use of water at Twin Buttes Reservoir.  (Presentation by Interim Water Utilities Director Ricky Dickson)


The reason for pumping last year was the city's critical need for water.  Today, the North Pool is five feet above the level needed to push water through the dam.  There isn't a critical need.  However, the city does has rented huge PVC pipes for the last four months.

The decision will be to keep renting pipe and bring back the pumps or have Gajeske remove the remnants of last year's pumping operation completely.  Yet, this is not the way Interim Water Chief Ricky Dickson chose to present the situation:

Financial Impact: (Unknown at this time)


What?  The City knows how much pump rental cost last year.  When the city had Gajeske pull their pumps did they not agree on a re-installation fee and monthly rate for 2013?

Other Information/Recommendation: Flow of water from the South Pool through the equalization channel to the North Pool in Twin Buttes has stopped. At the current time, the water level in the North Pool is 5 feet above dead storage which is elevation of 1885. The total content of the Reservoir is at approximately 12,790 feet. It is recommended the notice to proceed be issued to Gajeske for re-delivery of the pumping system prior to August 2013 (as requested by Councilman Alexander).


Former Water Chief Will Wilde expected the South Pool to reach a level where it would begin to naturally flow into the North Pool around the end of February/early March of 2013.  This prediction, if supported by current South Concho River flow and South Pool lake levels should be presented.

A former reason for consolidating the pools was to save on evaporation during our hot, dry summer months.  With language of August 2013 it seems the City could be pumping during the worst time of year for water loss.  Last year, the city had no choice.  This year, it may.  Pray for rain.
Posted by PEU Report/State of the Division at 3:48 PM