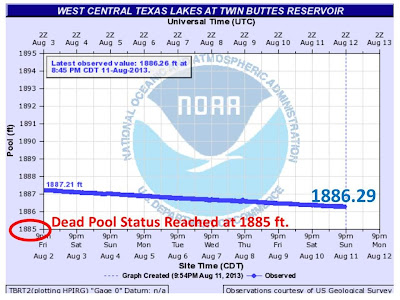 The time nears for Gajeske's pumps to move to the North Pool, given it's approaching dead pool status  The three monster pumps took the South Pool from over 4,000 acre feet to less than 200.  The pumps ran for nearly four months at the South Pool.

Drought, evaporation and watershed groundwater depletion teamed up to leave Barnhart, Big Lake and Mertzon struggling to supply public water.  Meanwhile oilfield companies purchase water from ranchers and private property owners.  A friend owns property on Spring Creek, which stopped flowing more than once this year.  He said a neighbor sold a chunk of his land to oilfield companies and they're putting in multiple wells.

While Chuck Brown of the UCRA speaks of hurricanes and tropical storms filling our lakes, that hasn't been the case since I moved here in 1994.  The biggest refill I've experienced came from consistent rains over several seasons.  They recharged ground water, causing springs and rivers to run steady.  The water that took Twin Buttes from 3% full to 30% was crystal clear.  I could stand in shoulder deep water and see my toes.  I windsurfed what felt like the Caribbean, where rocks and vegetation could clearly be seen ten feet below.

With everybody putting a straw in the earth and selling the water to their brother, I'll venture that was my once in a lifetime experience.    People may see the bottom of Twin Buttes soon, but I doubt it's under a layer of water.

Update 8-12-13:  The Standard Times caught up to TBR with their story on moving the pumps.  Their story maintained the city's illusion that combining the pools would reduce evaporation.  The amount transferred from the South Pool went to the city's daily water use or seeped/evaporated in transfer.  There was nowhere near the promised five foot rise in the North Pool.  The South Pool furnished San Angelo water for nearly four months.  How much longer will the North Pool provide?.
Posted by PEU Report/State of the Division at 8:26 PM