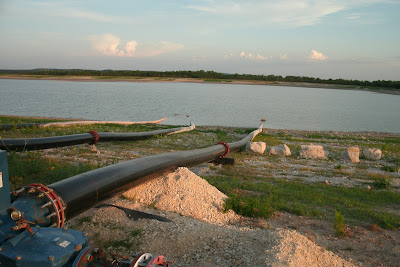 As of August 1 all three pumps at the South Pool had stopped.  The City of San Angelo moved every bit of the recent runoff to the North Pool. 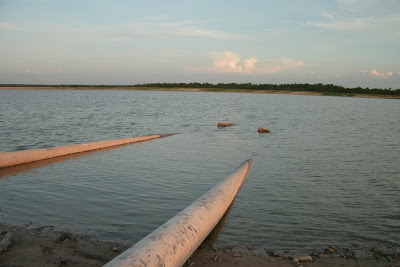 Recall Councilman Paul Alexander's assertion that pumping the South Pool would raise the North Pool by five feet?  Moving over 4,000 acre feet since mid April did virtually nothing.  On April 1 the North Pool stood at 1887.98 feet above sea level.  As of today the North Pool's elevation was 1887.09.  That's a drop of nearly one foot after three months of full bore pumping.

At this point the next step for the South Pool is Mother Nature's.   The City could move the pumps to the North Pool, which will soon enter it's own dead pool status.  Also, it'll have been 105 days since pumping began when Council meets again.  If new Water Chief gives Council its requested update, it would be 55 days late.
Posted by PEU Report/State of the Division at 10:14 PM