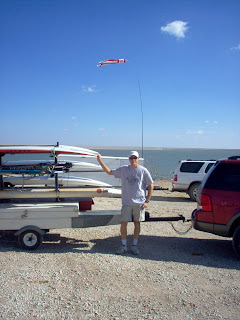 As a sixteen year resident of San Angelo and an active windsurfer, I applaud the City’s motivation behind changes at Twin Buttes Reservoir. From 1995-1999 I actively communicated with Mayor Dick Funk, Mayor Johnny Fender, City Manager Tom Adams, Water Chief Will Wilde, Representative Charlie Stenholm and Mike Martin from the Bureau of Reclamation on the issue they're planning to address. I put much energy into being part of the solution, picking up dangerous trash and calling officials when I saw suspicious behavior. I picked up over 10,000 bottles, a few car batteries, oil filters, exposed trot lines, shotgun shells, diapers, needles, even automobile mufflers.

When I started, longtime windsurfers told me I was beating my head against a wall. Mostly, they were right. After a brief burst of activity, City maintenance declined. Areas formerly mowed became overgrown. I allowed myself hope when the City received a Texas Parks & Wildlife grant for a new boat ramp and bathrooms. We got the ramp, but no restroom facilities.

At the last City Council meeting, Carl White stated vehicles would park in designated areas, then walk or bike to the water. Depending on the city's plans, this could cause problems for windsurfers.

The best place to windsurf in San Angelo is Twin Buttes Reservoir. For decades we’ve had access to the shoreline. We share the beaches with other small craft owners, kayakers, kite boarders, fishermen with john boats, catamaran and other small-hulled sailors.

Windsurfers use the series of beaches on the North side of the North Pool, where the city officially maintains a park area. Our launches go by names like Diaper Beach, AJ’s, Jimmy’s, Fin Buster, Fish Head and Bill’s Beach. 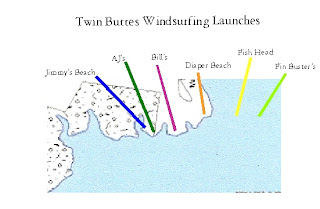 The North Pool is sailable down to around 10% of containment level. Varied topography requires we move closer and closer to the dam as the lake level falls.

Launching from the boat ramp is a major hindrance for windsurfers. To begin with, we don’t like getting close to boats. Deep water is good for a boat launch. We prefer a slow grade, especially if we’re helping beginners.

We do our best to sail West Texas’ winds with safety in mind. We chose our launch sites based on wind direction, wind speed and water level.

We call our big wind days, “combat sailing.” On such days, we don’t sail alone. When dust is in the air, we use small boards and little sails. Combat sailing days often have a West Wind. The new boat ramp is in a hole. It doesn’t get the West Wind, making for almost an impossible launch.

As the water level falls, the area in front of the ramp becomes dangerous. Bluffs and the banks of the Middle Concho become obstructions, even for a sailboard that needs only two feet of water to operate.

When the ramp is completely dry, we can still sail. The beach we’d use is a half mile away.

I’ve spoken mostly of the North Pool to this point, however, the South Pool has its advantages. It’s a bowl, so as the water goes down, there are but a few underwater obstructions. It’s a better place to take beginners, given a South wind blows struggling sailors back to shore. The entry grade is a gradual slope, so students don’t wear themselves out swimming in water over their heads.

I have compassion for local citizens who use Twin Buttes as a summer cooling station. I feel for the homeless people who sometimes make the area their temporary home. I’m intolerant of those who purposely break glass bottles, set unmarked trot lines and engage in fireworks fights. For fifteen years, I’ve said dumping and criminal behavior are unacceptable.

For years I heard from officials, when the water’s back up, the City will do better. Ironically, when the water came back up, I could stand in water shoulder deep and see my feet. As we sailed, we could see rocks and vegetation on the lake bottom. It was like being in the Caribbean, without the salt water.

After a decade wait, the city "is ready" to do better, hopefully not by cutting off access to the water. 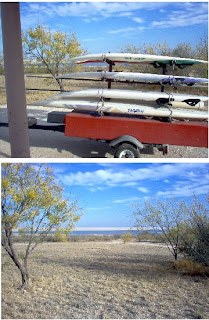 There’s nothing better than sailing God’s breathe on life giving waters. I’ll find a way to keep doing it, but appreciate any help City leaders can give citizens who use Twin Buttes in responsible ways.
Posted by PEU Report/State of the Division at 12:43 PM