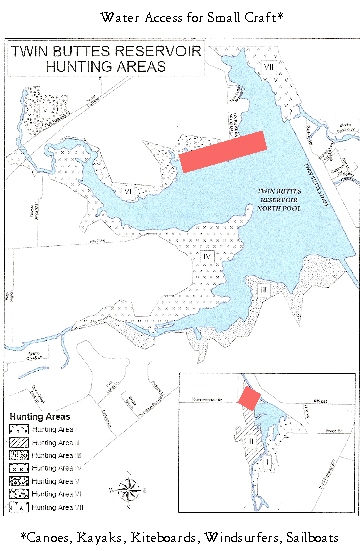 A surprise item on the November 16 San Angelo City Council meeting addressed Twin Buttes Reservoir.  Leaders briefly described implementing restricted areas with designated parking, where people would access the water by foot or bicycle.  I've yet to hear the City's plans to accomodate small craft owners, canoes, kayaks, catamaran's, sunfish, and windsurfers.  I spoke to Thomas Michalewicz with the Bureau of Reclamation and San Angelo's Parks Director, who said plans were a higher level.  I e-mailed Water Chief Will Wilde, requesting plans incorporate windsurfer access, the red shaded areas in the picture above.  I haven't heard back, despite volunteering thousands of hours picking up trash solution at Twin Buttes.

The action packet for the December 7 meeting included the following information.  Restricted access is Phase I.  As Phase II and III have short-term time frames for implementation, I assume the rush is on.  For those regularly recreating on Twin Buttes, access could be restricted:

Consideration and discussion of matters related to public safety issues and access to public areas at the Twin Buttes Reservoir:

· Consideration of authorizing the expenditure of up to $150,883.00 from the Lake Nasworthy Trust Fund for the construction of pipe rail fencing, gates, signs, and parking areas to limit access to some public lands at the Twin Buttes Reservoir.
· Discussion of possible amendments to City of San Angelo, Code of Ordinance, Article 9.100 entitled "Lake Nasworthy-Twin Buttes", and consideration of authorizing staff to proceed with said amendments for purposes of addressing public safety issues related to Lake Nasworthy-Twin Buttes area.

Summary: San Angelo's lake parks are a valuable economic development resource that historically have been underdeveloped and, thus, underutilized. Reversing that trend requires a comprehensive plan for improving and managing City-owned and -managed properties around Lake Nasworthy and Twin Buttes Reservoir. That plan must begin with increased efforts to eliminate unlawful activity and to increase security around Twin Buttes.

History: Management and operation of San Angelo's lake parks have been the Water Department's domain because of their proximity to the City's primary water sources – Lake Nasworthy and Twin Buttes Reservoir. Because the Water Department's charge is first and foremost to ensure a safe, clean water supply, management of the lake parks has always been a lower-tier priority. The City Manager recently asked the Parks and Recreation Department to team with other City departments, including Operations, Police and Finance, in crafting a plan to develop and manage the parks and open space around Nasworthy and Twin Buttes, with an end goal of increasing usage and, subsequently, the economic development opportunities that are affiliated with the lakes.

All involved agree the first step must be to increase public safety around Twin Buttes by enacting measures that will strengthen security and eliminate unlawful activity. That activity includes dumping and littering, drug use, underage drinking, assaults, and other illicit behavior.

City staff has identified 18 access points around Twin Buttes that lead to thousands of acres that are difficult at best for the Police Department to patrol and monitor … and in some cases virtually impossible. Re-establishing control of these areas necessitates installing approximately 29,000 linear feet of pipe fencing, 18 heavy-duty gates and warning signs at these access points to eliminate vehicular traffic into undeveloped properties. Cutouts in the fencing would ensure these aeas remain available to citizens interested in walking, hiking, running, birding, bicycling, riding dirt bikes, etc.

Additionally, the Police Department has identified weaknesses in the City ordinances that govern the uses of the waters of and properties around Lake Nasworthy and Twin Buttes Reservoir. The Police Department and City management recommends the following changes to allow its officers to better monitor activity around the lakes:

· Sec. 9.108 (b), change "Lake Ranger" to "City Manager or his designee," so the ordinance reads, "Open Fires. Open fires in camping or picnic areas are prohibited except in fixed established metal, stone or brick fireplaces or in areas properly protected and approved for such use by the City Manager or his designee."
· Also in Sec. 9.108 (h)(9) titled "Restricted Areas," change "Twin Buttes Park camper hookup area" to "the land area of Twin Buttes," so the ordinance reads, "It shall be unlawful for any person to be in either Spring Creek, Middle Concho Park, or the land area of Twin Buttes between the hours of 10:30 P.M. and 6:00
A.M. unless such person either possesses a valid camping permit or is accompanied by and in the presence of another person who possesses a valid camping permit." Further, the SAPD would like to delete the sentence that follows: "This subsection shall not apply to the Twin Buttes Park camper hookup area whenever the water level of Twin Buttes Reservoir is below the end of the main boat ramps located in Twin Buttes Park, adjacent to the Twin Buttes Marine."
· Amending the prohibition against discharging firearms other than shotguns in designated hunting areas to also include prohibiting firearms in the land area of Twin Buttes, other than shotguns (no slugs). Police report they often respond to reports of shots fired at Twin Buttes, and they routinely find people with pistols and rifles, but unless they see them discharging the weapons or find evidence that they have been discharged, they cannot take any enforcement action.
· Prohibiting the possession and discharge of fireworks in the land area of Twin Buttes.

If Council approves of these proposed ordinance changes, Legal would draft the changes for formal approval by Council at a later date.
Financial Impact: The Operations Department estimates the cost of constructing and installing 29,060 feet of pipe railing with 18 gates will be $150,883. That includes $87,883 in equipment and supply costs, plus $63,000 for approximately 4,500 man hours.
(See attached document for cost break-down.)

These expenses would be funded through the Lake Nasworthy trust. Section 36(c) of the City Charter states that "90% of the annual investment income from the Fund may be used by the City of San Angelo to pay for lake and river improvements, services to enhance water recreation and the elimination of related litter and pollution. … A public hearing must be held on the proposed uses of the investment income during the budget and budget amendment process."
City Management believes the provision to eliminate litter and pollution makes this project eligible for trust fund monies.

Related Vision Item
(if applicable):
While Twin Buttes is not a neighborhood, this proposal is in keeping with the Neighborhood Vision of establishing appropriate regulations to protect neighborhoods.

Other Information/
Recommendation:
Staff envisions this proposal as the first of four phases that will lead to needed development and stronger management of the City's lake parks at Twin Buttes and Nasworthy.

Phase II would address operations and permitting (day use and overnight camping) at Lake Nasworthy, as well as proposing conceptual improvements for Nasworthy. These recommendations would be brought to the Council in January. Staff would seek to have all of these changes in place in February or March, before the spring rush at the lakes.

Phase III would address operations and permitting at Twin Buttes. These recommendations would be brought to the Council in February, with the goal of having them implemented before the hunting season begins in next fall.

Subsequent phases would address continued improvements and developments at both lakes.

Those with small crafts, that wish to keep drivable water access, need to speak up quickly.
Posted by PEU Report/State of the Division at 11:32 AM