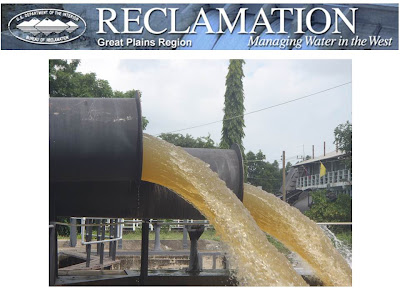 Item #16 on the agenda for Tuesday's City Council Meeting is:

Based on the water supply currently available to the City, the criteria for entering Drought Stage, Level II, are met.

The South Pool at Twin Buttes is up three to four feet from October 2011.  The North Pool  is down more than that, despite water flowing through the Equalization Channel. 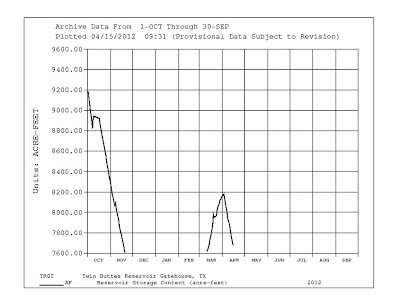 What changed that the City suddenly qualified for Drought Level II, now vs. last November?  San Angelo's Ivie allocation was cut in half.  Enjoy the South Pool now.  The City plans to pump it away.  It's clear from the March 20 minutes.

SELECTION OF GAJESKE, INC. FOR RFP WU-02-12 LAKE PUMPING SYSTEM TO TRANSFER WATER FROM THE SOUTH POOL OF TWIN BUTTES RESERVOIR TO THE NORTH POOL AND AUTHORIZATION FOR THE INTERIM CITY MANAGER OR DESIGNEE TO EXECUTE ANY NECESSARY RELATED DOCUMENTS

Water Utilities Director Will Wilde presented background information. General discussion was held on the project timeline, aquatic life within the pools, existing pump and natural movement of the water, water storage capacity, project not approved during the budget process; providing vendors experience, including other projects completed; designating the water fund as the funding source, and
evaporation of the water.

Mr. Wilde informed staff is preparing to begin the project in June depending on the amount of rain received between now and then and in the event of the Stage II Drought Conservation Plan. He noted the vendor is aware the project may or may not occur.

Mr. Wilde informed staff will present a future budget amendment, and then further action will by City Council to begin the project.

A vote was taken on the motion on the floor. AYE: New, Alexander, Silvas, Adams, and Hirschfeld. NAY: Morrison and Farmer. Motion carried 5-2.

I only read one motion, yet there were two votes.  That's about as clear as Twin Buttes water.  Without Ivie to shoulder the load, Twin Buttes is it.  Pray for rain.
Posted by PEU Report/State of the Division at 9:13 AM