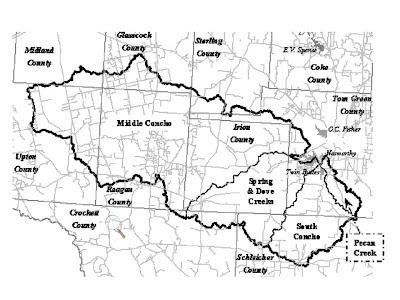 Councilman Paul Alexander shared the city's study on pumping the total volume of the South Pool into the North Pool at Twin Buttes.  It turns out the North Pool will rise by 5.15 feet, while annual evaporation is 5.25 feet, the vast majority of which occurs during the summer. If the whole amount of the transfer stands to be evaporated over a year's time, what are the savings?

The reality is the dry 211 acres in the North Pool will absorb some amount of South Pool water.  How much thirsty vegetation grew on those 211 acres?  This came from a Twin Buttes Brush Control Study from April 2010:

One acre of saltcedar on the Pecos River of Texas was estimated to use 5-7 acre-ft. of water every year (Hart 2003). The longer saltcedar occupies an area, the drier the area becomes. Saltcedar currently dominates 1,092 acres in the project area (Twin Buttes).

The City frequently offers crude analysis to push their desired strategies.  This got play in August last year, then became embedded in a consent agenda.  The public, especially users of the South Pool, deserve better.

I understand the city needs water.  It should pump what it needs to in the most efficient and effective way possible.  If it can build a pipeline to pump Hickory water, it should be able to do the same from the South Pool.  Rather than assume no loss, it should guarantee such.

This issue arose in 2004.   Why didn't San Angelo's Water Czar make recommendations to utilize South Concho River water effectively in a time of drought?  What impact did agricultural commitments have on such plans?

Much of the stored water is used to irrigate 10,000 acres of crop and rangeland (Reclamation 1994).

How did the Water Czar's "hobby farm," which draws water for irrigation from the South Pool, enter into consideration?  The public won't know.  That topic is off limits.

Update 4-7-12:  Councilman Alexander's medium rain may be in the offing.
Posted by PEU Report/State of the Division at 9:03 PM