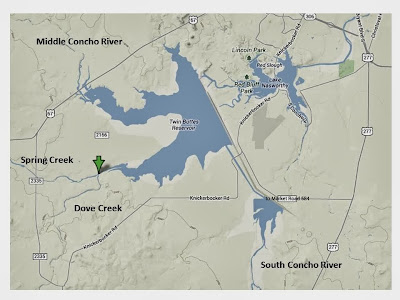 With drought and oilfield water use Spring Creek no longer has perennial flow.  Several times this year Spring Creek had no flow.  The South Concho had reduced flow this year, but recent rains have it adding volume to Twin Buttes South Pool.

When all four tributaries are in flood huge volumes can flow into Twin Buttes.  Consider this event from August 1996:

Thunderstorms developed during the night of August 28th over the Concho Valley and became stationary over Irion and southern Tom Green counties through the morning of the 30th. Rainfall amounts of around 6 to 7 inches occurred to the south of San Angelo in Christoval and to the west of San Angelo in Mertzon.

The flooding quickly subsided on the evening of August 29th as the water rushed into Twin Buttes Reservoir in southwest San Angelo. The amount of water in the reservoir rose from near 22,000 acre feet to 60,280 acre feet as the height rose 18 feet. This water was a welcomed sight to residents of the Concho Valley, as the drought this year had left lakes and reservoirs very low.

Last fall Twin Buttes had a seven foot rise after flooding rains.  Seven feet of new water would isolate Gajeske's pumps at the North Pool.  Eighteen feet would inundate them and their diesel fuel tanks.

The pumps have been silent since they removed the foot of recent runoff.  I'm headed out to the North Pool to see if they're still there.  I went to the South Pool yesterday and the South Concho's flow has it looking more like a lake. 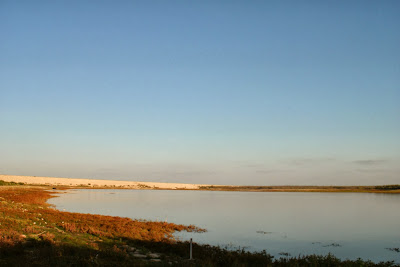 Update 10-13-13:  Eastern Tom Green County is currently under a Flash Flood Warning due to a stationary thunderstorm like August 1996, only much more rain is anticipated.  This should help Lake Ivie.   I went to Twin Buttes North Pool yesterday and the pumps were high and dry, as was the Middle Concho River (pictures to come).

Update 2-10-14:  San Angelo Live did a story on the Concho Valley's various watersheds.
Posted by PEU Report/State of the Division at 8:45 AM