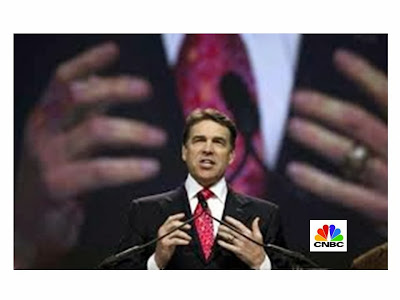 Fresh from his stint on CNBC selling Texas' low tax status, Governor Rick Perry will speak today on the topic of water in San Angelo.  The Standard Times reported Perry will speak from an undisclosed location at an unknown time on West Texas' need for water.  Perry wants to divert $2 billion from the Rainy Day fund to create a water infrastructure bank.

West Texas has oilfield companies poking holes in the ground for water.  Their trucks eat up highways, already behind on maintenance from both a municipal and state perspective. 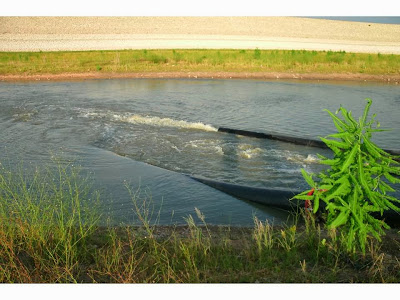 Our region's water landscape is dire, between population growth and oil/gas drilling. Dove Creek rose to five feet in rains two weeks ago.  Spring Creek didn't rise at all.

An oilfield company plans to take water from the ground right where Lopez Draw intermittently flows.  Did any Lopez Draw water actually make it to Spring Creek during recent rains?  Is Governor Perry paying any attention to this?  He sure seemed to enjoy his time in New Jersey.

As for Perry's undisclosed location and time for his meeting, it's clear the public is not invited.  We're to foot the bill for his heady life, meeting with news anchors, athletes and titans of industry.

Update:  The Standard Times reported  "Gov. Rick Perry visited San Angelo today and encouraged Texans to vote for Proposition 6 on Nov. 5.  “I understand the anxiety that occurs when you endlessly scan the sky for rain,” Perry said during a noon news conference Wednesday at San Angelo State Park, with dried O.C. Fisher behind him.  Perry was joined by about 50 people, including county and city officials, local businesspeople and representatives from the Upper Colorado River Authority.  Proposition 6 will amend the state constitution to transfer $2 billion from the Rainy Day Fund to finance water projects for local entities, such as pipelines, desalination plants and mesquite removal.  “It’s vital for local communities to have their say,” Perry said, urging San Angeloans and all West Texans to vote on the critical issue."
Posted by PEU Report/State of the Division at 7:17 AM