South Pool Up Over 3 Feet 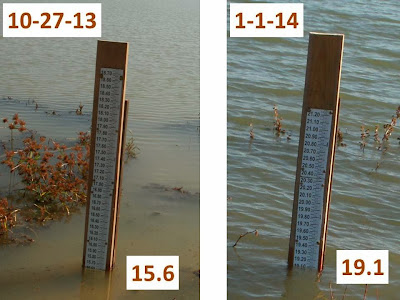 The South Concho River restored the South Pool somewhat the last few months. Last February City Council voted to pump the South Pool for the second year in a row.

Interim Water Utilities Director Ricky Dickson presented background information.  General discussion was held on the amount of water withdrawn from and transferred to the pool; starting the process earlier in June versus August; providing for a minimum water level in the south pool so not to drain completely; depending on all the variables, being more cognizant of the variables in order to better utilize the resources; the equalization channel releases, increasing the length of the pipeline, the mobilization and demobilization, and the related costs.

Motion, to direct staff to recommend a tentative start date but a date no later than June 15th; upon starting the transfer, present an update to City Council after 60 days; transfer the water as was conducted last year; and, with the understanding pumping will begin once the pools natural water flow ceases, was made by Councilmember Silvas and seconded by Councilmember Morrison.

Further discussion was held on allowing staff the flexibility to adjust the start date; the transfer of water in relation to the water conservation stages; and creating measurement data based on the transfer of water, the amount of water pumped, and the amount of water lost as a result of the process. Mr. Dickson advised an environmental assessment will be required before work can begin near the equalization channel. Mayor New suggested staff approach the Bureau of Reclamation to gather that information and move towards capital improvements to the area.

A vote was taken on the motion on the floor. Motion carried unanimously.


The 60 day update never happened.  No measurement data was ever presented to Council.  It remains to be seen when this item returns to Council's agenda.
Posted by PEU Report/State of the Division at 8:52 PM