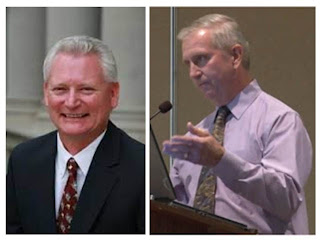 I found this Audio Script from 2011 while researching reclaimed water use, the focus of a City Request for Qualifications for Engineering Consultation.  The audio script is a short walk back in time, before two of the three people, Yantis Green and Will Wilde, resigned under ethical firestorms.  Even in this short piece there's an underlying story:

San Angelo’s wastewater is treated and delivered to an irrigation canal that pumps water onto 10,000 acres of farmland that span more than 80 farms.  With San Angelo’s lakes quickly evaporating in the historically hot, dry conditions, some city leaders are starting to view the use of wastewater exclusively for irrigation as a huge waste.

San Angelo City Councilman Paul Alexander is eyeing the millions of gallons of wastewater the city produces each day. He says the amount of water that flowed into the canal last year alone could sustain the city for six months.

Cut 2: I think we need to be more proactive than reactive and say “What can we do with this?” and we can save some of our water supply by using this effluent water on parks golf courses, things like that. That’s normal thinking for a city that’s trying to get more efficient with their water.

Of the 14 million gallons of water the city uses each day on average, about two-thirds, or 9 million of it, is flushed as wastewater.

Last year, the city delivered 2.8 billion gallons of treated wastewater to the 16-mile canal, which runs northeast from Lake Nasworthy to just past the small community of Veribest.

Constructed by the Federal Bureau of Reclamation, the canal hasn’t always carried San Angelo’s wastewater. Until 1995, farmers received fresh water from Twin Buttes Reservoir until a dry spell, when the city struck a deal with the farmers.

Cut 3: Green: We traded the city of San Angelo fresh water for wastewater.  That’s Yantis Green, he’s the manager of the Tom Green County Water Control & Improvement District No. 1, which operates the canal. Under the original agreement between the district and the Bureau of Reclamation, the district is entitled to 25,000 acrefeet of Twin Buttes water every year.

But with Twin Buttes well under 50,000 acre-feet, farmers could find themselves without a water source.

Cut 5: Green: Without the effluent, we wouldn’t have water right now. Until the lake gets back above 50,000 acre-feet.

But according to San Angelo’s water manager Will Wilde, the city is nowhere near actively pursuing the use of wastewater for municipal use.

Cut 6: Wilde: First we’ve got to have our primary source—you’ve got to have a source to start with before you end up with wastewater. So we want to make sure on the primary side we have ample quantities to meet most of what those projected long-term needs are here. At a point in time, I’d say, probably within the next 5 to 10 years—I think you’ll see a lot more emphasis on treating the wastewater to water quality standards, bring it back into the system as a supplement to your primary source right there.

The City of San Angelo has just begun building a pipeline to the Hickory Aquifer in McCulloch County, 65 miles away. The project won’t be completed until early 2013, but officials hope it will supplement San Angelo’s water supply for years into the future.

Though Wilde says, he thinks modern San Angeloans would more open to drinking treated water than those of previous generations.

Cut 7: Wilde: I think there were a lot of those in the past – I think, as we have another generation of individuals coming up, I think it’s a lot more accepted and people realize that all water is wastewater, it just depending where it’s coming from.


Will Wilde, owner of one of the 80 farms receiving reclaimed wastewater, negotiated the deal providing 100% of reclaimed water to himself and the other 79 farms.  There is no conflict of interest filing by Will Wilde with the City of San Angelo in this regard.  San Angelo City officials said they were aware of Wilde's cotton "hobby farm" and deemed it not a conflict of interest.

Wilde resigned in the middle of a hornet's nest of concerns over outrageous and seemingly unexplainable water bills, purchasing $100,000 in furniture for the Water Department without required City Council approval and the employment of his son Blake as a Hickory Pipeline contractor after being fired by the city and designated ineligible for rehire.

Yantis Green admitted embezzling $63,000 from the Water District via 1,000 personal purchases on his employer's credit card.  Green is currently serving his one year sentence, after which he faces two years probation.  There's nothing small about outsized egos, one signature purchases and a San Angelo drought of ethics.

Update 1-19-19:  The City of San Angelo acted to reuse its waste water as Twin Buttes took on significant runoff last fall.  Oddly, Yantis Green reported on this development without disclosing his former position with the Water Control District.
Posted by PEU Report/State of the Division at 9:32 PM