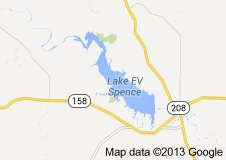 The North and South Pools of Twin Buttes Reservoir took on minor runoff from last week's rains.  Until both pools rise windsurfing is a risky proposition.  Two South Pool fisherman suggested Lake Spence might be worth the trip.  They're from Robert Lee and commented how much water Spence took in last fall from our region's runoff rains.  They shared access is easy and the lake uncrowded.   Spence is pictured below before volume increased over ten times: 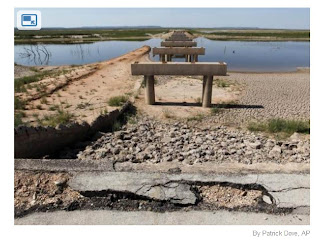 I researched Lake Spence water levels vs. our local reservoirs.  Spence holds over 30,000 acre feet of water.  That's nearly six times the volume and over four times the surface area of Twin Buttes.  I found an oddity.  Spence was constructed to supply water for San Angelo.

The reservoir is owned and operated by the Colorado River Municipal Water District (CRMWD) for the purpose of supplying water to the District and the City of San Angelo.


In justifying the Hickory Aquifer pipeline construction Spence came up in July 2009.

Mr. Wilde stated the Lake Spence water supply pipeline has experience problems and issues, primarily due to the materials used; therefore not a viable water source.


Right now the City of San Angelo has an unusable pipeline to Lake Spence.  I appreciate not reconstructing a pipeline to an empty lake.  However, San Angelo is spending $120.5 million on a stopgap water source in Hickory Aquifer.  Where will Spence water fall in San Angelo's hugely expensive water future?  Until the City refurbishes or rebuilds the Spence pipeline, I may have a windsurfing site.  Meanwhile, I'm praying for rain in the Twin Buttes watershed.
Posted by PEU Report/State of the Division at 2:30 PM