Will South Pool Last Until July 16? 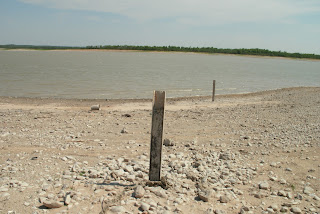 In February San Angelo's City Council talked about providing a minimum water level at the South Pool.  The discussion was to occur 60 days after pumping was initiated.  That would've been mid June, only the topic didn't arise at the June 18th or July 2nd City Council meetings.  San Angelo's new Water Chief missed his opportunity to show his proactive stance.

Last weekend one pump went dry and another neared stopping.  The City extended the intake, apparently intent on draining the South Pool.  All three pumps were operating on July 6.

How much water will be left when City Council meets again?  At the current rate of South Concho River flow and no precipitation, I'd venture very little.   The picture below shows sunken trees being revealed. 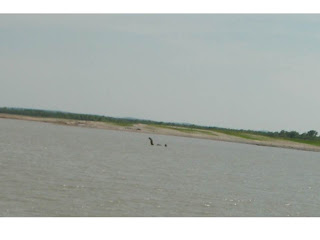 It looks like a lake monster, but the real demon is out of sight.  Spring Creek stopped flowing altogether, in part due to water sales to oil companies by an upstream landowner.  Barnhart's public wells went dry last month.  What "smells like money" to some is a whole range of suffering for others.

Update:  A walk back in time revealed "Aug 29, 2012 - It should be noted that Twin Buttes' south pool won't be drained completely, so the fish in and wildlife around the pool can be maintained."
Posted by PEU Report/State of the Division at 9:23 AM